“About as unconvincing as any Hollywood film.”

German director Wim Wenders’ (“The American Friend”/”Paris, Texas”) post-9/11 wacky road movie is set in a America still reeling from that attack and split into two opposing camps in how to deal with the problem. The cheapie was shot on digital video in 16 days. It offers a not too informative two hour look at paranoid superpatriotic Americans who see non-existent Muslim terrorists on every street corner, some self-righteous liberals who search for a way to end poverty in America’s hidden Third World-like urban areas and a heartfelt but shrill sermon by the director’s missionary alter ego on film trying to bring about a togetherness among all people. In the telling of this ‘my heart is in the right place’ California dreaming tale, Wenders collaborates with writers Michael Meredith and Scott Derrickson. There’s also a hipster background score from Thom and Nackt, and it includes world-weary tunes from Leonard Cohen and U2.

To show the divide in the Land of Plenty, Wenders presents it as a family quarrel between an LA family holding different views of the world–much like those between the blue and red states. Lana (Michelle Williams) is a spunky Christian do-gooder raised in remote foreign lands by her missionary parents. She arrives in Los Angeles from Tel Aviv after serving a tour in the West Bank, and goes to work in an inner city homeless shelter operated by Henry (Wendell Pierce) an earnest black minister colleague of her father. She’s also on a mission to make contact with her mentally unstable Vietnam vet Special Forces uncle Paul (John Diehl). Years ago he became estranged from her now deceased mother, his sister. Paul spends his time cursing the towel heads he spots in LA and patrolling the Los Angeles streets in a low-tech surveillance van hunting down would-be terrorists. He partners with wacko soul mate Jimmy (Richard Edson), who has a few police contacts and is always willing to let his mind run away with the possibility that they are uncovering suspicious characters through their gung-ho voluntary investigations and that they are fighting the good fight to save their besieged country from Muslim terrorists and liberals.

The two relatives meet as witnesses to the drive-by assassination of a young Pakistani Muslim. This incident takes them to the desert—Lana to help deliver the victim’s body to his family while Paul hunts down the dead man’s terrorist cell, as he foolishly believes he’s a terrorist because he carted boxes of borax cleansers which can be used to make ironically a ‘dirty bomb.’

Wenders intent is to deliver a wake-up call that this country has lost its way, as in this Land of Plenty there are so many impoverished souls while the country is preoccupied with a War on Terrorism that it’s clueless about and is diverting all its energy from such aforementioned vital homeland issues. The call is for Americans to return to their core values of helping one another and welcoming all into its melting pot.

The characters play out more as symbols than as real flesh-and-blood people. The story line and characters are clumsily presented as metaphorical hopes to rid the country of its hatred and intolerance, but the family opposites coming together under beautiful sunsets before the climax was about as unconvincing as any Hollywood film. Though one can’t argue over the message’s good intentions, one can question how incredibly naive is this mawkish production and how far off is the German director’s understanding of the American political landscape. Wenders appears as a soft-hearted tourist who has left the main tourist areas without a guide and appears to have lost his bearings hammering out obvious observations any German tourist could have just as easily noted if they went off the beaten path like the filmmaker. 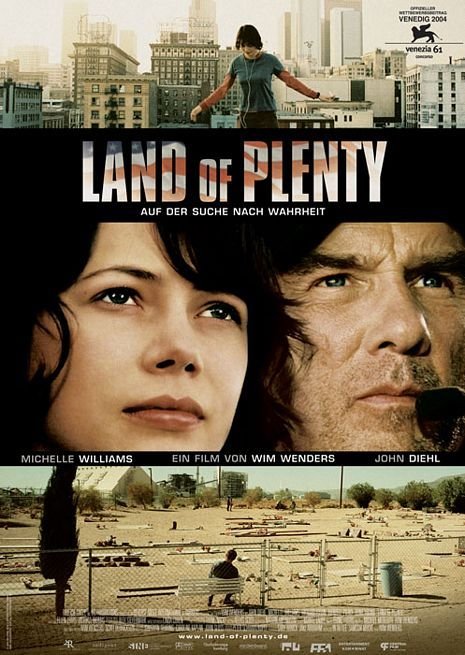