A nasty gangster picture about a sadistic homosexual London mob boss played to the hilt by Richard Burton. The inspired by White Heat pic is based on the novel The Burden of Proof by James Barlow and is written by Dick Clement, Ian La Frenais and the actor Al Lettieri. Director Michael Tuchner(“The Likely Lads”/”Fear is the Key”), noted for his television work, keeps it violent, edgy and unpleasant.

East-end thugs, led by the razor-wielding Vic Dakin (Richard Burton), teach one of their boys Benny (Stephen Sheppard) a lesson for talking too much and leave him dangling in critical condition with cuts outside the window of his hi-rise apartment.

If looking for something good about him, Vic lives with his elderly mom (Cathleen Nesbit) and she’s the only one he shows any tenderness.

Acting on a tip by a club owner (Anthony Sagar), paying the gang protection money, an insider (James Cossins) tells how easy it is to rob the payroll of a plastic company he resents for poor wages all these years. The gang get rival leaders Frank (T. P. McKenna) and the ulcer-suffering Edgar (Joss Ackland) to join them as a courtesy since the robbery is on their turf. Though they get away with the money, the robbery is botched. Edgar’s prints at the crime scene leads to his arrest. Vic is identified by a witness, but he gets his pimp boyfriend Wolf (Ian McShane) to blackmail a loose-living MP (Donald Sinden) to provide an alibi by threatening to show photos of him with Benny’s under-aged girlfriend (Elizabeth Knight).

The problem for Vic is that the dedicated police inspector, Bob Matthews (Nigel Davenport), is obsessed with arresting him and works out a plan to set him up in a trap that over-rides the alibi.

It’s low-brow fun seeing the respected Shakespearean thesp playing out of character as a detestable low-life thug. That was enough to get my attention. 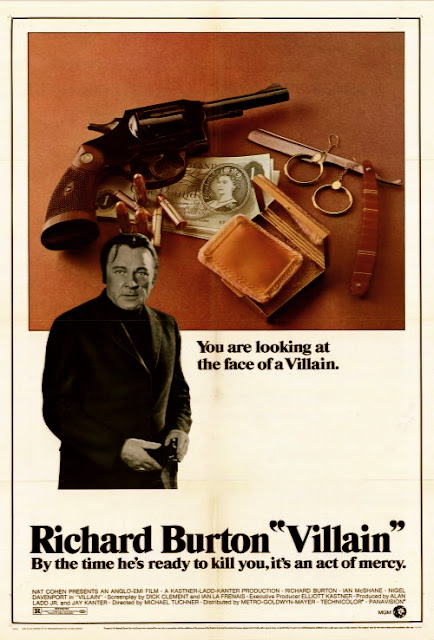 PRICE OF EVERYTHING, THE