“Raises the bar for crime drama on the boob tube.“

It was seen first in England onChannel 4 as a five-hour mini-series (seen by me in the States on the Sundance Channel), and is divided into three parts named after the years in which they take place—1974, 1980, and 1983. There are three different directors—Julian Jarrold (1974), James Marsh (1980) and Anand Tucker (1983). This gives it three distinctly different looks, but all three versions keep the corrupt police motto: “This is the North. We do what we like.” The weighty and elegant screenplay is by Tony Grisoni, who adapts it from the Yorkshire-born writer David Peace’s novel. Peace now lives in Tokyo. Tucker previously directed“Shopgirl” and “Hilary and Jackie,” and is the equal to the previous two directors in keeping things gruesome, grim and gripping.

The film’s final leg of the vile and depressing trilogy of serial killings and police corruption, has the teenage male hustler named B.J. (Robert Sheehan) and a slob, overweight, second-rate lawyer named John Piggott (Mark Addy), whose mum just died, drawn back to Yorkshire to face the music of their past. When in 1983, in the town of Fitzwilliam, another little girl has gone missing, this raises doubts whether the man arrested for the abductions and killings in 1974 was the guilty party. Piggott is asked by Mrs. Myshkin (Beatrice Kelley), a friend of his mum’s, to appeal her son’s conviction as the Yorkshire Ripper because cops beat him and made her mentally challenged son confess. The ill-suited lawyer reluctantly takes the case and intends to appeal the conviction of the retarded boy, Michael Myshkin (Daniel Mays). This action threatens the power-structure of corruption, who are on the verge of closing a big real-estate deal with wealthy developer John Dawson (Sean Bean) and want no distractions. Things have returned to normal after the cops bungling of the Ripper case through incompetency and whatnot, but they have now convinced the public they got the right man and don’t want that changed. While B.J., who was victimized as a child by a man of the cloth, Rev. Martin Laws (Peter Mullan), confronts him with his weak voice of conscience, the troubled cop, Detective Inspector Maurice Jobson (David Morrissey), who was in on the fix from the beginning and is as guilty as hell over the cover-up, finally shows pangs of a conscience and in a sad way becomes the film’s bad guy hero as he deals with the situation as if he were a gangland hit man and takes out the target.

It paints an ugly picture of Thatcher’s post-industrial Yorkshire, in this intricately plotted film that seems contrived, too stylized, too difficult to follow because of the flashbacks to the other films and the strange way of altering the time sequences, and that it never gets to your heart as much as it gets to your guts.But it’s a good watch, and raises the bar for crime drama on the boob tube. 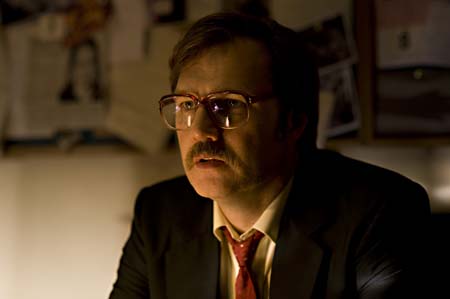 IF I WERE KING