“Doesn’t live up to its title, as there are plenty of dull moments.”

This so-called agreeable domestic comedy doesn’t live up to its title, as there are plenty of dull moments. Veteran studio director George Marshall (“Murder, He Says”/”The Gazebo”/”The Mating Game”) does a serviceable job keeping it sitcom silly and predictable, as he mines humor from a sophisticated city gal going hayseed in a rustic western setting. It’s taken from the autobiographical novel “Who Can Ask for Anything More?” by Kay Swift, the eminent Broadway composer of the ’30s whose memoir focused on her 1939 whirlwind courtship and marriage to a rodeo cowboy named Faye Hubbard (they divorced a few years later); it was written by Doris Anderson and Lou Breslow and produced by Harriet Parsons, daughter of gossip columnist Louella Parsons.

Broadway songwriter Kay Kingsley (Irene Dunne) sings at a Madison Square Garden rodeo charity benefit and meets rodeo rider Chris Heyward (Fred MacMurray). After a whirlwind romance, she marries the Wyoming rancher widower with two young daughters (Natalie Wood & Gigi Perreau) and treks by car cross-country to his fix-’em-up Cougar Rock ranch. Kay meets his prosperous cantankerous rancher neighbor Mears (William Demarest), who holds the water rights to his ranch; his oafish but loyal sidekick Orvie (Andy Devine), who reintroduces himself from NYC and does his standard issue second-banana act; Margaret Gibson (Pokey Webbfoot) the overweight Indian housekeeper who gets under Kay’s skin for trying on her New York clothes; and the attractive young widowed Jean Morrow (Ann Doran) who was Chris’s love interest before Kay but shows no jealousy.

Kay is constantly razzed for her poodle and trying to close the ranch gate in the mud and being annoyed by her new testy step-children, and in addition the socialite is shown having a hellish time trying to become a good horsewoman and adjusting to living with a stubborn hubby who foolishly can’t forgive her for losing his water rights. The hillbilly comedy couldn’t be more chicken or corny or tedious. To make things more grating, Chris keeps calling wifey “Buckshot.” I guess that’s about as endearing as this film ever got for me.

Banality rules in this unfunny farce, where every scene seemed strained and Dunne is forced to resort to blank expressions to extract comedy from such slight comedic situations. Irene also sings three songs in the film composed by Kay Swift: “Once You Find Your Guy,” “The Man with the Big Felt Hat” and “Sagebrush Lullaby.” 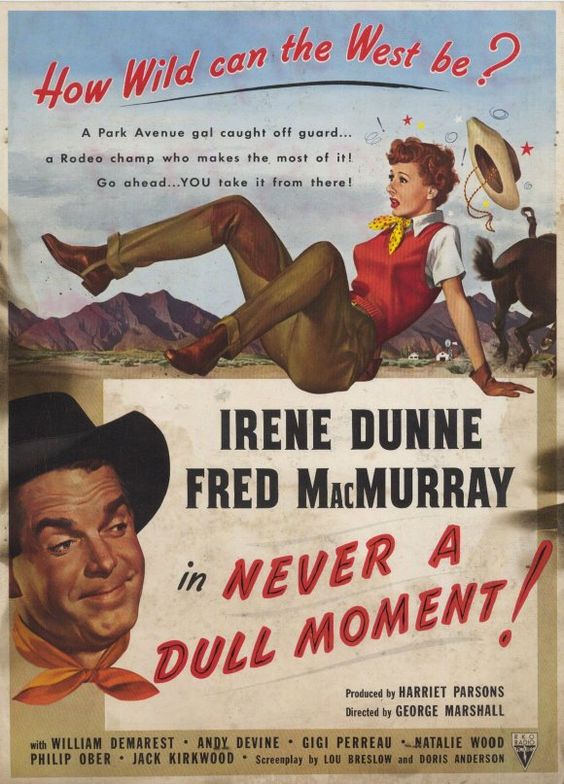