A sparkling crime melodrama richly steeped in theatrical atmosphere. Much of the film seems to have been shot either at the Broadway theater or at Sardi’s restaurant. It’s directed with style by John Gage and adapted from the story “Annabel” by William Mercer. Leo Rosten is the screenwriter.

Valerie Stanton (Russell ) is a famous Broadway actress who has been associated with successful producer Gordon Dunning (Ames) for the last ten years. The film opens as they are arguing in his theater’s office, just before the closing show of “Escapade” their latest comedy hit. She is tired of doing popular fluff comedy plays and wants to do a serious play, Ibsen’s “Hedda Gabler,” with rival producer Peter Gunther. Gordon seems amazed that she would want to play a tortured neurotic woman who kills herself. The argument gets more heated when they talk about love and their relationship, as Gordon believes love is a business proposition. He tells her, “I created you. I can’t let go of you.” She tells him that she wants to marry the prominent architect Michael Morrell (Genn), someone she has fallen in love with. When Gordon threatens to sully her name with Morrell, the black gloved actress becomes fearful and in the heat of the moment kills him when she conks him over the head with a statue from his desk.

Since Valerie has an iron-clad alibi, suspicions go to a rival actress in the show, Marian Webster (Trevor). The body is found by Marian, an actress in Gordon’s stable who was his girlfriend and star before Valerie moved into the picture. Marian’s fingerprints are found all over the murder weapon, and she has to be hospitalized as she goes into a state of shock and is unable to be questioned by the investigating homicide officer, Captain Danbury (Greenstreet).

The colorful captain is a theater buff, and in his inimical style adds a comical contrast in moods to the other more sober-minded leads. Russell is all fear and trepidation. Genn is the gallant gentleman lover. Ames is the jealous producer who must possess what he creates. Trevor is the bitter woman who feels she has no luck after being jilted.

In this solid production, the tension is kept up until the final curtain call as to whether Russell will confess, get caught, or get away with the crime of passion. 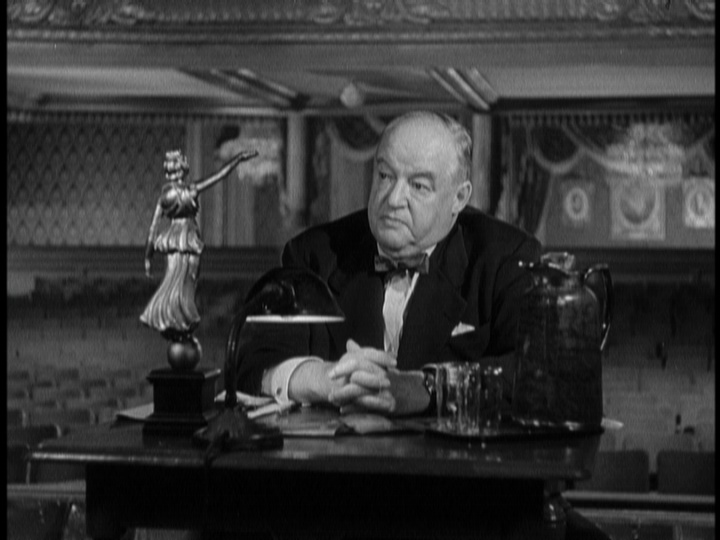