Anthony Mann(“Desperate”/”T-Men”/”Raw Deal”), known for westerns and noir films, impressively shoots this gritty modern-day war drama, the only war film he directed, that’s set on September 6, 1950, during the beginning of the Korean conflict, with an infantry platoon caught behind enemy lines and unable to communicate with battalion headquarters.

The lost platoon tries to make their way back to their home station though surrounded by the enemy and with only a slim chance of surviving, and not able to make contact with their battalion by radio. Grizzled commander Lt. Benson (Robert Ryan), obsessed with saving his men’s lives, challenges his battle weary troops to try and reach Hill 465 and forces them to take the arduous march through sniper attacks and land mines. The men commandeer a speeding Jeep, driven by a gruff and skilled battle tested sergeant from another outfit nicknamed Montana (Aldo Ray), who doesn’t give a damn about anything but trying to get his beloved shell-shocked catatonic colonel (Robert Keith) to a field hospital.

The gist of the film has the men in hostile turf and in constant skirmishes with the enemy, with the lieutenant trying to save as many men as possible. Montana has an obsessive father-son relationship with the elderly colonel, the only person to ever call him son and mean it. In the climax, the platoon, with only a few survivors, reaches their battalion station, only to find it occupied by the North Koreans. The lieutenant and Montana band together to try and take the hill, in what appears like a suicide mission.

It’s a routine ‘lost patrol’ war drama, shot in B/W, but the low-budget film’s action scenes are terrific and Mann’s direction is taut. It’s based on the novel “Day Without End-Combat” by Van Van Praag and is written by Philip Yordan. It fondly reminded me of the more gripping and bloodier Sam Fuller Korean War film “The Steel Helmet” (1951). 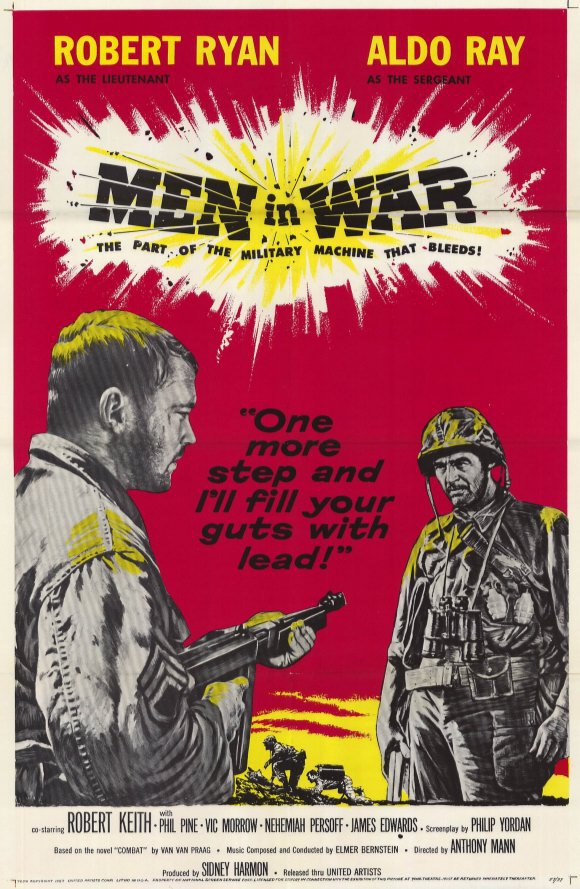