I COVER THE WATERFRONT

“At the time it was fresh, daring and influential, especially raising eyebrows in the 1930s were the scenes of casual sex.”

This erotic melodrama is directed by James Cruze (“The Great Gabbo”/”The Covered Wagon”/”Come On, Leathernecks!”) and is set on San Diego’s waterfront. It’s based on the best-selling book by Max Miller and the screenplay is by Wells Root. The story about an investigative journalist is dated but at the time it was fresh, daring and influential, especially raising eyebrows in the 1930s were the scenes of casual sex and Claudette Colbert swimming in the raw (though she’s not seen in the buff, as it’s only implied). It concerns tough-minded, bachelor, aspiring novelist, waterfront reporter H. Joe Miller (Ben Lyon), trying to get the goods on a rascal captain, Eli Kirk (Ernest Torrence), whom he suspects of smuggling illegal Chinese immigrants into the country. Miller convinces his blustery hard-headed city editor, Phelps (Purnell Pratt), to keep him on the story while he romances the unsuspecting free-spirited pretty daughter of Eli’s, Julie (Claudette Colbert), to pump her for info. Naturally he falls madly in love with her, but has to face her when she learns he was using her to snag her dad.

Played against the background of the Depression and the black market, it has Eli as the kindly single parent but the sinister fisherman who finds there’s more dough to be made fishing for shark than tuna. He uses the inside of the shark to smuggle in the Chinese. Julie only thinks he’s bad when drunk, as she’s unaware of his darker side.

Hobart Cavanaugh plays the unemployed free-loader reporter pal of Miller’s, who while drunk provides some inane comic relief. Though Colbert is not believable as a fisherman’s daughter, she’s playful in her two-week romance with the rather stiff Lyon and gives the agreeable but slight film enough energy to hold my attention.

It was made just before the Hays Code censored explicit sexiness. 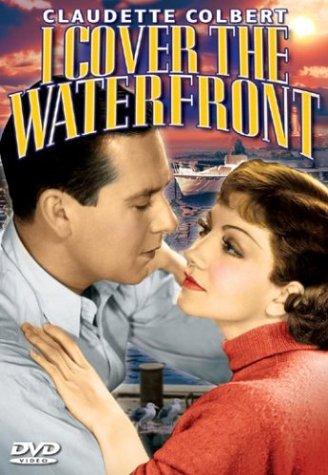