VAMPYROS LESBOS (aka: THE HERITAGE OF DRACULA)

“Never rising above an exploitation film.”

Linda Westinghouse (Ewa Strömberg) and her boyfriend Omar (Victor Feldman) attend an Istanbul nightclub, where a sexy dark-haired dancer turns Linda on as she performs an exotic dance. Linda recognizes the dancer as the same woman turning her on in her recurring dreams. Her psychiatrist (Paul Müller) dismisses the dreams as merely sexual frustration and suggests she get a more satisfying lover.

Her German law office sends the well-stacked blonde to Anatolia, where she’s to go to the Kadidados Islands to meet her Hungarian client Countess Nadine Carody (Susann Korda, rising Franco star who died in a car accident after the film was shot) to settle the complicated inheritance she received from Count Dracula–her lover. She’s told by the hotel porter at her stopover, Memmet (Jesus Franco), not to go to the island–“that it’s a place of madness and death;” Linda meets him later in the wine cellar for further information, but runs away when she finds him there with a bloodied woman doing who knows what to.

On the Countess’s island, Linda’s surprised to find that the Countess is the same woman who was the nightclub dancer. The two enjoy a nude swim together on the deserted island and they drink some wine, but Linda is drugged and seduced by her vampire host (who seems to have no problem being seen in the daylight). When Linda awakens she finds the Countess dead in the swimming pool or it might just be a scorpion. In an unconscious stage, Linda’s brought to the private clinic of Dr. Seward (Dennis Price), where another vic of the Countess named Agra (Heidrun Kussin) is too hysterical and wacky to make much sense. Now Linda has a heck of a time trying to convince all her caregivers that the Countess was a vampire who made her drink blood and be her lover, just like the filmmaker has a tough road ahead trying to convince that this sweet smelling trash is some kind of art. Linda’s solution is to return to the Countess’s island paradise and confront her to see who will live. The director’s solution is to hope that at least some of his hypnotically metaphorical allures will stick when they hit the wall.

The dreamlike otherworld moody film is overwrought with cheap symbolism about sexual angst and emotions gone haywire. It’s a beautiful looking film that hides its emptiness in a gorgeous surreal setting. For this film, we can at least forget that Franco in most of his other films is such a hack. 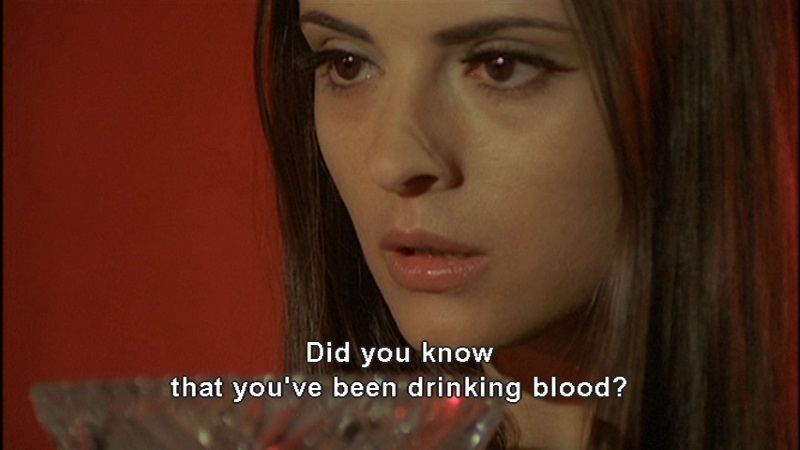