Exciting formulaic revenge Western (made in Spain) as directed by Edwin Sherin (helmed “The Great White Hope” on Broadway) in his debut feature film that is adapted from a novel by Elmore Leonard. Roland Kibbee and David Rayfiel handle the screenplay duties. Bob Valdez (Burt Lancaster) is the principled Mexican-American constable, who despite being discriminated against and referred to as a “greaser” works for the local sheriff. He descends on a mountain shack where a black man is accused by cattle baron and gunrunner Frank Tanner (Jon Cypher) of murdering his friend James Erin. Valdez tries to negotiate a peaceful settlement, as the hunted man says he’s innocent. But R.L. Davis (Richard Jordan), a wormy, loony, bigoted member of the posse starts shooting at the suspect and Valdez is left little choice but to kill him in self-defense. Valdez demands $100 compensation from Tanner to pay the expenses for the wrongfully accused Negro’s pregnant Apache widow and the sheriff promises his boys will kick in a matching $100 if Tanner pays. Tanner not only refuses, but has his hired Mexican gunslingers nail Valdez to a cross and made to walk back home across the desert.

The film goes over-the-top showing how bigoted the men are, how they go to great lengths to humiliate Valdez, and that the men are so ruthless that they seem more like animals than human beings. Bearing the cross, Valdez becomes a modern-day Christ figure seeking martyrdom. When he heals from his wounds after returning home, he heavily arms himself and irrationally and stubbornly goes after Tanner for the compensation. To ensure that Tanner will pay he takes as hostage his trophy girlfriend, the beautiful Gay Erin (Susan Clark), the widow of the aforementioned dead man that sparked the ongoing tragedy. Valdez, while holed up in the mountain, kills eleven of Tanner’s hired gunslingers, and in the end faces Tanner down still demanding compensation as the remaining gunslingers refuse anymore to obey Tanner’s orders.

Lancaster is interesting to watch as he plays the idealistic outsider up against the bigoted majority. Though the story is predictable and unconvincing, the unrelenting character portrayal by Lancaster is impressive. 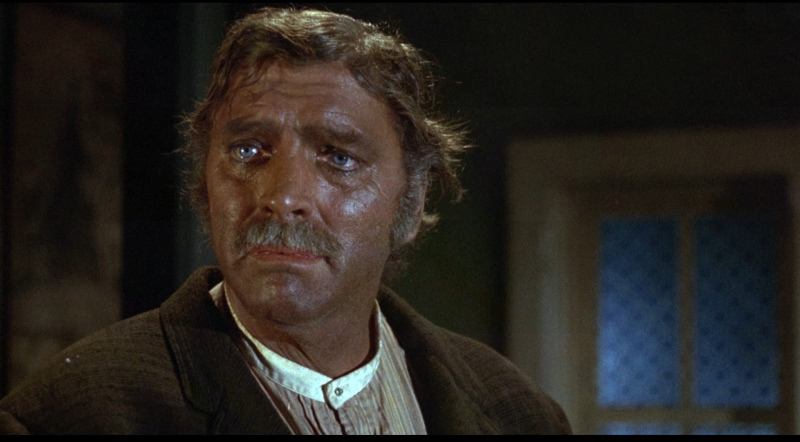