“Makes what is familiar seem fresh.”

Bill Bennett’s (“Two if by Sea”) film opens with a quote from the poet Dylan Thomas telling how the film got its title: “We watch the show of shadows kiss or kill,/Flavored of celluloid, give love the lie.”

The film is well-acted, has colorful characters and a twisty plot, but it’s just on first impression another typical young lovers on the run from the law road movie set in the Australian outback. The difference is that Bennett’s script is taut and makes what is familiar seem fresh. It surprisingly turns out to be an intelligently done character study of the young couple, offering some psychological dimensions that keep the fires burning in a manner of speaking.

Kiss or Kill pays homage to the film noir ”Kiss Me Deadly.”

Nikki (Frances O’Connor) and Al (Matt Day) are a couple of small-time grifters in Adelaide. It’s Nikki’s job to flirt with out-of-town married businessmen in their hotel bars and go with them to their room–there she drugs them and then Al barges in and rolls them. When one of their vics, a lawyer, accidentally dies, the two flee for Perth with the contents of the dead man’s briefcase. It contains a videotape of Zipper (Barry Langrishe), a former local soccer star, who is a pedophile. The tape of a young boy being sodomized agitates Nikki to such a point that she calls Zipper, and attempts to blackmail him. To their surprise in hot pursuit are two bumbling cops (Chris Haywood and Andrew S. Gilbert) and Zipper, who is determined to get that tape no matter what. When they flee to the outback, an aborigine tracker is also in pursuit.

On the road, Nikki and Al find that wherever they stop, a murder occurs. They begin to become panicky and suspect each other, after seeing a trail of dead bodies. Al suspects Nikki, who turns out to be a sleepwalker, and she thinks his quick temper may have something to do with the murders.

In this grim neo-noir tale, the paranoia of the couple increases and their past seems to be catching up with them. But they are not the only ones with relationship problems, as mistrust and dread fills every interpersonal relationship in the film including the one between the pursuing policemen.

The film is seemingly edited entirely in jump cuts in a stylishly effective manner, as it takes a poke at our perceptions and anticipations and makes everything about the ordinary seem treacherous (such as the motel owner using a blow torch to heat the fondue). It should please film noir lovers more than the rest of the viewing audience. Filmed with a caustic wit and shrewd insight, this feature more than makes up for Bennett’s previous bomb Two if by Sea. 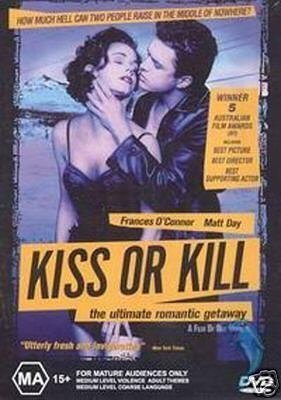