“Never terrible, but never that good.”

Richard Wallace directs an overlong action-packed romantic melodrama from the novel by Charles E. Scoggins; it’s written by Borden Chase and John Twist. It’s about an American engineer named Johnny Munroe (John Wayne), partners in a construction firm with Pop Matthews (James Gleason), who attempts to build a railroad tunnel in the Andes Mountains for the tycoon Frederick Alexander (Sir Cedric Hardwicke). When not tunneling away or telling the boss a bridge is the better way to go, Johnny falls in love with his boss’s lovely daughter Maura (Laraine Day). Problems arise not only in the construction of the tunnel (the cold-hearted materialistic magnate doesn’t care about the workers safety but in getting the shortest route possible and keeping the costs down), but with common-man Johnny’s tabu romance with Maura opposed by her upper-class stuffy dad. It all comes down to how Johnny handles things on the job when his ethics are challenged and how the romance develops.

Never terrible, but never that good, Tycoon goes on its predictable way featuring pretty scenery, an easy to look at Day and a fiery playful Wayne, who shows he can act outside of a Western, fighting against all odds to make their romance work. 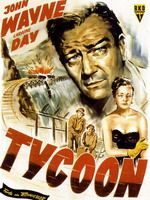 MY JOURNEY THROUGH FRENCH CINEMA