“A fun Western even if unconvincing.”

A fun Western even if unconvincing. George Sherman (“Hell Bent for Leather”/”Comanche Territory”) stylishly directs this lushly filmed in Technicolor Western, set during the California Gold Rush. Luci Ward and Jack Natteford write the appealing story, and they write the screenplay with William Bowers.

Stage robbers Charles E. Boles (Dan Duryea), Jersey Blake (Percy Kilbride) and Lance Hardeen (Jeffrey Lynn) dissolve their partnership on the frontier trail after narrowly escaping from a hanging, as Charles goes to California while the other two go to Texas. Charles cheats the others out of their hidden robbery money from a past job in a double-cross. In Sacramento, Charles partners with the crooked Wells Fargo banker Clark (John McIntire), and with inside info robs Wells Fargo gold shipments on the stage while dressed in an all-black masked outfit. The plan is to drive Wells Fargo out of business in the local area and when they lose confidence with the public, open a rival bank. In the meantime Charles is viewed as a respectable rancher.

Reuniting in a bar after two years, Lance and Jersey, hired as Wells Fargo drivers, force Charles to partner with them again. Also, both Lance and Charles fall for Lola. But she chooses Charles, now ready to go straight to marry the dancer, even after he confesses to her that he’s Black Bart. Things end badly for the robbery trio, as the film is framed around the imprisoned Jersey telling the gang’s story to a reporter visiting the jail. We learn that the Wells Fargo chief (Frank Lovejoy) brings in his best agent (Don Beddoe), who sets a trap whereby a posse takes down Black Bart and Lance in a relay station. Bart, against his better judgment, was forced by Lance to go there to pick up the stagecoach money. 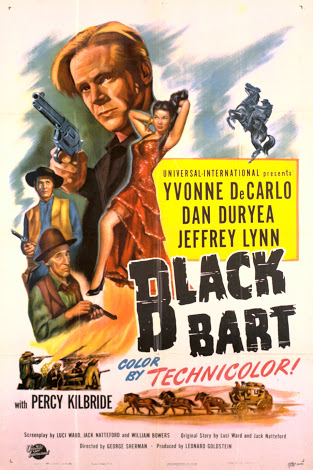