“Never comes to a boil.”

Scottish filmmaker Bill Forsyth (“Local Hero”/”That Sinking Feeling”/”Breaking In”) creates a most original and ambitious idiosyncratic film, that tries to capture what it’s like to be human during different historical periods. The unclassifiable pic, with no detectable general audience to target, bombed on its American release and Warner Brothers put it on the shelf and sent it back to the director to make it more cinema friendly for a re-release. This came a year later when Forsyth added an unseen voice-over narration presented throughout by Theresa Russell, who starts off telling us “This is the story of a story.”

It’s an innovative but murky film, perhaps following along the lines of DW Griffith’s epic silent of Intolerance, that turns out too understated and flat to excite, as its five fables presented in different historical periods, though well-conceived and executed, never comes to a boil. Viewed as a whole, it seems quite satisfying because of its freshness and intelligent perceptions and quirky comedy in such bleak settings. The five vignettes center around a troubled character named Hector, who is played throughout by a subdued and credible Robin Williams. The stories interlock, but not in a seamless fashion. Each Hector fights to survive his bitter fate, tries to find love and a place where to belong while also trying to go back home to his lost loved ones, and always faces the great challenges of a being human in a sometimes unjust and cruel world.

It spans a period of 6,000 years that begins in the Bronze Age, with caveman Hector losing his family to raiders. Hector is next magically transported to Rome as a slave to his foolish master Lucinnius (John Turturro), and has to use his wits to survive a forced suicide and gains his freedom when his master commits suicide. Hector next turns up as a medieval wanderer, riding in a wagon along the war-torn countryside, and meets the lovely widow Beatrice (Anna Galiena). Though she speaks a foreign language he doesn’t understand, he goes to her humble farmhouse to meet her two children and elderly mom. But he splits in the morning, feeling guilty he has stopped looking for his lost family and admits that not speaking the same language is a problem. Hector is next seen as a Portuguese nobleman shipwrecked on a North African beach and feeling despondent because his beautiful girlfriend Ursula (Lizzy McInnerny) has dumped him for the nobleman Francisco (Jonathan Hyde). Hector borrows Francisco’s custom-made leather leg-high boots to walk from Africa back to Lisbon, and leaves the lovers on the beach with the other stranded Portuguese travelers. Finally, in the modern-age, Hector is a stressed-out Manhattan resident and landlord, who spent two years in jail for cooking his company’s books and now is real estate partners with the shady former jailbird Boris (William H. Macy). Hector is anxious about spending a week-end at his Long Island beach-house with his two kids (Helen & Charles Miller) and reconciling with them, after being estranged from them ever since he was divorced and his wife re-married.

All the low-key stories coalesce into a gentle piece about what it is like to go through the human experience, that is strangely moving and somewhat provocative despite missing some spice to make it more tasty. 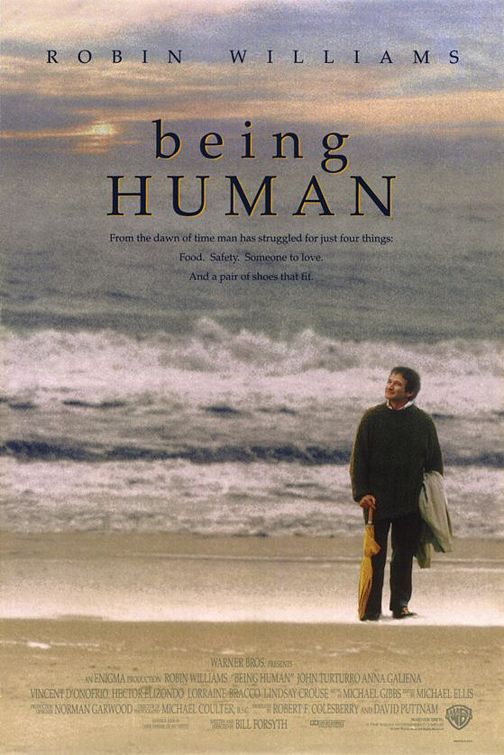