A so-so B-movie murder mystery directed by the future esteemed filmmaker Anthony Mann (“T-Men”/”The House on 92nd Street”/”He Walked By Night”) from a script by Robert Kent and a mystery story by Gelett Burgess. Two O’Clock Courage is a remake of Benjamin Stoloff’s Two in the Dark (1936). In this film Stoloff goes from director to producer. Mann has added a great deal of comedy relief through use of his spirited supporting cast, that was not present in the original. Two O’Clock Courage follows in the vaunted tradition of 1930s whodunits. The film is photographed in a conventional style and lacks the overall grace the great cinematographer John Alton would give Mann’s later more sophisticated 1940s film noirs.

Tim Conway, the real-life brother of George Sanders, known in the film as The Man, develops amnesia after being hit on the head with a gun at a murder scene and is bleeding profusely. A woman cabbie Patty Mitchell (Ann Rutherford) nearly runs the bewildered man over in the foggy night. After hearing his tale of woe, she trusts him enough to join forces with him as they search for his identity and for the killer of the crime he thinks he witnessed. It’s soon learned through a questioning reporter that Conway is suspected of the high-profile murder and the police are after him, but the working-class Patty is convinced he’s a good bloke and generously helps him try to prove his innocence. She’s also fallen for the gentle mug, who appears to be upper-class and not someone she would normally come into contact with in an intimate way.

The pair of amateur sleuths travel through the theater and nightclub districts and uncover that the mystery concerns a plagiarized play, Two O’ Clock Courage, written by the dead man. It ends well when his memory suddenly gets jogged, and a flashback takes us to the crime scene. Most of the scenes take place in a drab rooming house, while the one great outside shot is in the thrilling opening that could serve as the film’s leitmotiv. The active camera uses a tracking shot of the street sign, the building corner, and the hero’s body as seen in the darkness, and thereby the stage is set for the mystery story to unfold. 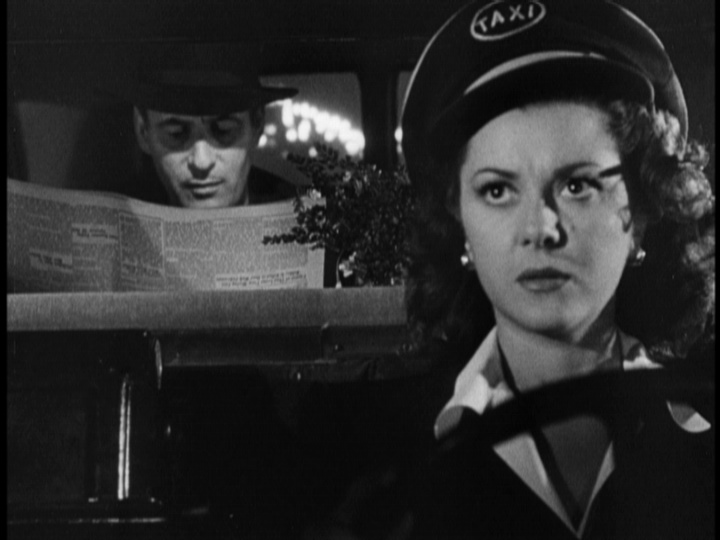