TWO FOR THE SEESAW

The Robert Wise (“Blood on the Moon”/”West Side Story”) adult comedy-drama is based on the successful two-character Broadway play by William Gibson (it starred Henry Fonda and Anne Bancroft), that’s expanded with the inclusion of secondary characters for the film but unfortunately still remains stage-bound and too talky. Isobel Lennart adapted it from the play. One of the film’s main problems is that the leads are miscast. Robert Mitchum is too stiff and acts as if he was doing us a favor by appearing in this production; while Shirley MacLaine, considerably more suited for the part, but tries too hard in a strained performance lacking the required energy needed for her perky heroine to shine and has no on-screen chemistry for her lover (though the two marrieds began an off-screen affair that lasted two years).

Embittered suicidal Omaha lawyer Jerry Ryan (Robert Mitchum) has been in Manhattan for a month after his separation from his wealthy wife of 12 years and loss of his job, arranged by his wife’s family. The lonely, self-pitying and indecisive Jerry contacts his hometown acquaintance Oscar and gets to go to his artist party in Greenwich Village. At the party, the square meets the 29-year-old extrovert bohemian Jewish Bronx dance instructor Gittel Mosca (Shirley MacLaine) and the two lonely souls begin an affair.

But Jerry is too uptight to have a wholesome relationship, still thinking of his comfortable past life, and we suffer listening to a lot of shrill dialogue while Jerry unwinds and tries to get his life back on track. He soon gets a job with a prominent New York law firm and generously sets the struggling Gittel up with a little dance studio in an empty loft. But she’s not happy because he still pines for his wife. The tension gets to her and she has a hemorrhaging ulcer; after being hospitalized Jerry devotedly takes care of her at home.

When Jerry’s divorce comes through, he fails to tell Gittel as he’s too afraid to marry her. It all comes to an unsatisfying conclusion as Jerry makes an unintelligent decision that doesn’t add up and seems phony and sentimental. There’s an underlying inertia that the film is never able to satisfactorily solve. 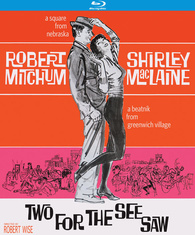