SORCERER (aka: WAGES OF FEAR)

“The film could never shake the dark cloud that hung over its head.”

William Friedkin (“The French Connection”/”The Exorcist”) directs this 21 million dollar budgeted inferior remake of Henri Georges Clouzot’s brilliant 1953 “Wages of Fear.” It’s based on the novel by Georges Arnaud. It bombed at the box office and received mixed reviews upon its release, but has since been viewed in a more positive light. The film’s unfortunate misleading title (a reason many attribute to the film’s b.o. failure) is derived from the fact one of the trucks used in the jungle drive is named the Sorcerer.

Jackie Scanlon (Roy Scheider), Victor Manzon (Bruno Cremer), Nilo (Francisco Rabal), and Kassem (Amidou) are four desperate men who are on the run and can’t return to their own countries. The film opens by showing what led these disparate men to go to the remote environs of the Nicaraguan jungle: Rabal kills a man in a South American hotel. In Jerusalem three Arab terrorists bomb an Israeli bank with one arrested, the other killed and Amidou the only one to escape. In Paris a wealthy investment banker, Cremer, from an old line family firm is about to be arrested on fraud charges after bankrupting his firm and decides to leave his wife of ten years to escape prison. In NYC Scanlon is the getaway driver for a gang that robs a Catholic church and during the botched robbery a priest is shot, whose brother happens to be a powerful Mafia mobster who puts out a contract for Scanlon.

The four hombres settle in the godforsaken Nicaraguan town of Porvenir where they work the oil fields for low wages as laborers and must turn over part of their wages to the corrupt police to keep them quiet about their illegal papers.

Things become more hopeful for the four when an American oil company is seeking out brave drivers willing to haul nitroglycerin over 200 miles of impossible jungle terrain, basically a suicide mission, as that is the only material that will put out an out-of-control oil well fire started by terrorists and that is the only way to get it there. The four with nothing to lose volunteer to each collect the 8,000 pesos ($10,000 in American money) and an offer of legal citizenship, and when a German driver is chosen over Rabal he remedies the situation by assassinating the German and thereby taking his place.

The film had its exciting moments as the men truck the nitroglycerin and Friedkin heightens the tension by his realistic shooting methods, but too many moments were painstakingly slow in developing and though it tried to bring in politics to play that never was lucidly done. It also lost the existential edge Clouzot kept intact from the novel and instead showed how these four amoral men were forced out of necessity to break their isolation and work together as a team to survive the mission. The only problem was that none of these men were likable and able to gain the viewer’s sympathy, and the film could never shake the dark cloud that hung over its head. 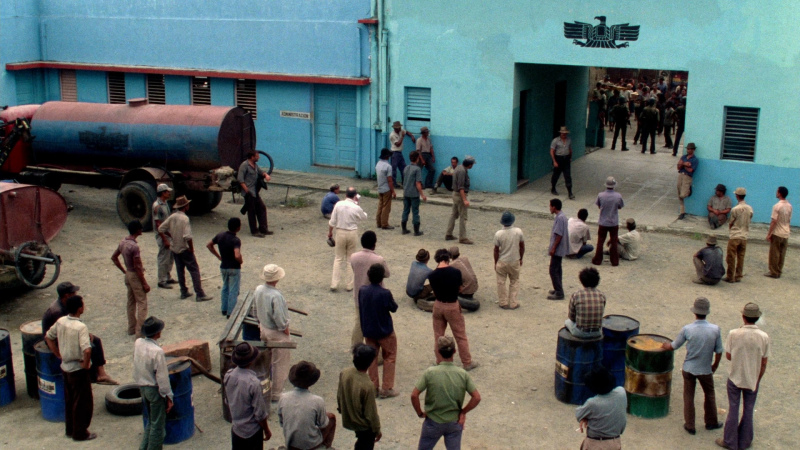