“Stunning, bloody, strange and very entertaining despite all its hokum.”

The over-the-top, jokey, and gory comic book film, with a massive cast (therefore no chance of any character development), is fiercely directed and written by the eccentric and outspoken James Gunn (“Dawn of the Dead”/”Guardians of the Galaxy”). It’s stunning, bloody, strange and very entertaining despite all its hokum. Gunn is new to the successful DC Comics franchise, and is a perfect fit to direct their latest installment (more like a video game than a movie). For inspiration Gunn bases the film on a DC comic from 1959, and keeps it in tone with “The Dirty Dozen” (1967) helmed by Robert Aldrich. This film is a sequel to the mediocre 2016 commercial hit “Suicide Squad” by David Ayer. The improvement is that it’s better made and done with more conviction and gore.

The feisty, no-nonsense government operative Amanda Waller (Viola Davis) recruits a rag-tag team of super-powered prisoners (all with a killer mentality), who are referred to as the Suicide Squad. They are led by Colonel Rick Flag (Joel Kinnaman). The team is sent on a mission to make a beachhead on the South American island of Corto Maltese. The unit sees battle and the only survivors are Harley Quinn (Margot Robbie) and Rick. Earlier Amanda recruited Bloodsport (Idris Elba) to lead another team on that same island, as he tries to rescue his estranged teen daughter (Storm Reid) from an unjust prison sentence.

The Suicide Squad is to eliminate the mad scientist, the Thinker (Peter Capaldi), and destroy his secret Jotunheim laboratory, where he holds captive Starro, a giant alien starfish and conducts cruel experiments.

Rick and Harley join with Bloodsport and his crew: the chrome-helmeted nutty pacifist Peacemaker (John Cena) and Ratcatcher 2, Cleo Cazo (the Portuguese actress Daniela Melchoir), who is the daughter of the original Ratcatcher (Taika Waititi). He trained rats to attack and kill his enemies. The replenished Suicide Squad attempts to finish their mission.

The team of DC Comics super-villains first appeared in a 1959 story (The Brave and the Bold). This film’s Suicide Squad was created by John Ostrander in a four-issue arc in Legends in 1987.

All the performers easily roll with their formulaic roles (with a noteworthy performance by John Cena as a psycho with a penchant for killing to make his pacifist points). The super-villains share with America’s so-called good guy real heroes the belief in the American “can do” myth, and that myth is used again in this film because it still appeals to a large audience who believe in such heroes (even if they’re compromised).

Stuff keeps happening in this absurd action/adventure film, as the quips keep coming and the anti-heroes never stop believing they can make this impossible mission possible. When the gunfire slows down for a few seconds don’t be surprised to see a pretty woman onscreen or have the players reveal their serious mental issues. The irony is in how accepting are the world saviors and the audience of all the violence as normal. 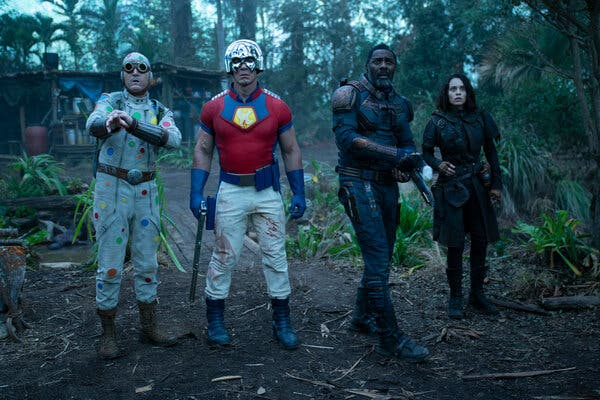 WOMAN WHO RAN, THE