“It’s an engaging thriller that follows along the lines of a typical Hollywood crime drama, but blends in conventional Japanese concerns.”

A Dostoievsky influenced black-and-white film noir directed by Akira Kurosawa (“The Bad Sleep Well”/”Red Beard”/”Yojimbo”), that’s based on his novel. It’s a postwar police procedural film, set during the American occupation and during a sweltering summer in Tokyo. It’s an engaging thriller that follows along the lines of a typical Hollywood crime drama, but blends in conventional Japanese concerns. The screenplay is credited to Ryuzo Kikushima. It’s considered to be the young Kurosawa’s breakthrough film.

Rookie Tokyo detective Murakami (Toshiro Mifune) is humiliated that his police Colt gun is stolen on a crowded city bus by a pickpocket due to his carelessness, but his resignation is not accepted by the police inspector. Instead he’s teamed with veteran detective Sato (Takashi Shimura), and the detectives conduct a thorough investigation, doing much leg work, which leads them to slum areas and through an underworld black market operation of selling valuable hot guns.

Like in a Dostoievsky novel, the sensitive young homicide detective, an army vet, learns to face his own criminal impulses. The cops methodically track down gun-runner Hondo and through him discover that the Colt thief is the dangerous 28-year-old stray dog Yusa (Isao Kimura), who robbed a poor woman of her wedding ring and shot her in the arm and next in panic kills a happily married woman to rob her of a mere 50,000 yens. This makes the stray dog a mad dog, and Murakami feels responsible for the crime spree. The guilt-ridden and high-strung Murakami has to be calmed down during the entire manhunt and constantly told it’s not his fault, by his wise paternal mentor Sato.

Both Mifune and Shimura are Kurosawa favorites and appeared in many of his films. Though a minor film, it showed the Americans that the Japanese can make decent crime films like they do in Hollywood. The location shots keep things authentic, as we visit a chorus line to see the killer’s 16-year-old girlfriend Harumi (Keiko Awaji) shake her booty and to a professional ballgame to watch how the cops arrest Hondo in a packed Giants’ stadium without putting the crowd in danger.

It’s all good, but never impressed as something great. It’s more technically proficient than anything else. 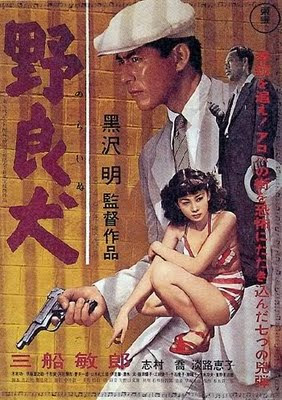 IF A TREE FALLS: