I BURY THE LIVING (aka: KILLER ON THE WALL)

“Dismally ends with a whimper instead of fright.”

A tense old-fashioned psychological horror story directed by Albert Band (“Ghoulies 2″/”Face of Fire”) and written by Louis Garfinkle, that was filmed in nine days on the site of an LA cemetery. Its loftier aim is to question the powers of man that goes beyond science. Though the film has an intriguing premise, the plot line proves to be dumb and the macabre tale unconvincing. It doesn’t do much with the eerie mood it sets, and dismally ends with a whimper instead of fright. Even star Richard Boone doesn’t add much to the expressionistic production, whose sets by Edward Vorkapich are what’s best about it.

Department store owner in the upscale small town of Milford, Bob Kraft (Richard Boone), is reluctantly made by his fellow board of directors the manager of Immortal Hills cemetery. After forty years service heavily Scottish accented Andy McKee (Theodore Bikel), a loyal gravedigger at the cemetery, is forced to retire and receive a pension. At the cottage by the cemetery, there’s a huge graveyard grounds map in the office. By sticking a black pin in a plot it indicates a death, while white means life.

When Bob accidentally mixes up the pins, the young Drexel couple dies. When it happens again to Isham, Bob is convinced he’s unwittingly the murderer. The investigating detective, Lieutenant Clayborne (Robert Osterloh), the local newspaper reporter Jessup (Herbert Anderson) and his fiancee Ann (Peggy Maurer), find it too far out to believe (which ultimately is the problem with the pic). Bob’s Uncle George tries to convince him that’s untrue by having him stick black pins in the map for the three remaining board members (which has to be one stupid idea, when the obvious solution is to get Bob as far away from the pins and the map as possible). When the three die during the night, Bob is about to lose his mind and as a last resort to prove that he has the power of life and death he remains for the night at the cemetery and resurrects the newly buried by placing white pins in place of the black ones. The film ends with a silly non-supernatural resolution, before Bob commits suicide, when by this time only a silly supernatural explanation would do justice to the narrative.

The film would have been better served if it were an episode of television’s The Twilight Zone (1959-63). 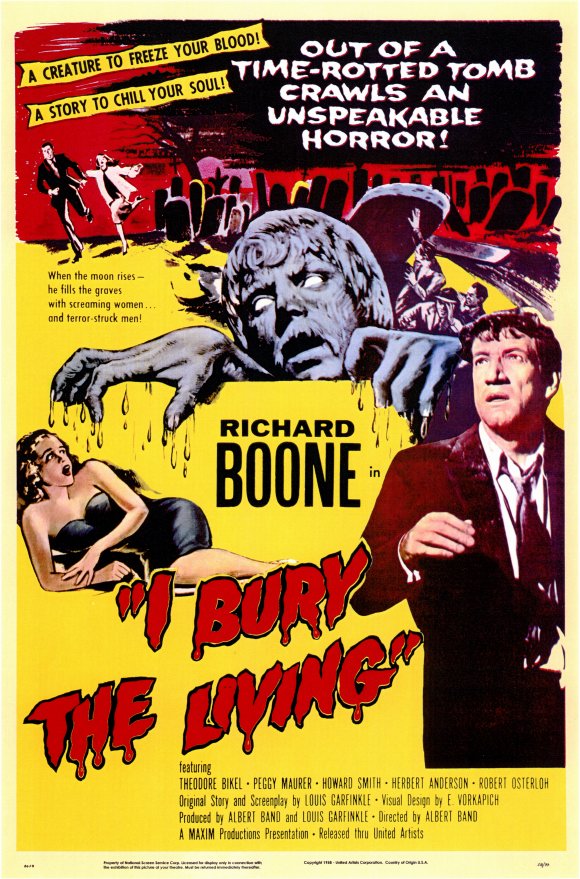