STEAMBOAT ‘ROUND THE BEND

“Outdated and doesn’t hold up to modern taste.”

John Ford (“The Searchers”/”The Informer”) directs America’s favorite folksy comedian, the humorist Will Rogers, in his final film. Rogers, the highest paid actor at the time, was killed in a plane crash before the film opened later that year.

Ford directs this warm and gentle slice of Americana life drama, that’s terribly outdated and doesn’t hold up to modern taste. The nice guy humorist’s jokes felt flat and the story was cornball, also Ford keeps it too sentimental as is his want when his film’s are not top-notch. Steamboat is based on the novel by Ben Lucian Burman, and is weakly written by Dudley Nichols and Lamar Trotti.

It’s set in the early 1890’s, on a Mississippi River steamboat called the Claremore Queen (named after the town in Oklahoma where Will Roger was born). Dr. John (Will Rogers) is the con man medicine man selling a rum-based phony cure-all tonic he calls Pocahontas on the steamboat. Dr. John gets suckered into betting his boat could beat the better and more modern steamboat of the rival Captain Eli (Irvin S. Cobb), called the Pride of Paducah, in a  race up the Mississippi River to Baton Rouge. The winner gets to keep the boat of the loser. Dr. John expects his young nephew Duke (John McGuire) to join him and co-pilot the boat. But Duke shows up with an abused by her ignorant pappy (Roger Imhof), runaway “swamp gal,” named Fleety Belle (Anne Shirley), and tells the shocked uncle he’s been charged with murder even though it was in self-defense. Talked out of hiding in the woods, John surrenders to the sheriff (Eugene Pallette) and is tried by the hanging judge who sentences him to be hanged in Baton Rouge. To pay for lawyers, Dr. John puts a wax museum in the steamboat that public pays to see.

The climax involves getting to Baton Rouge in time via the race to bring to the governor a holy man witness to the incident who works the “river” saving the people from drinking, the New Moses (Berton Churchill). He saw the fight and will testify in favor of John that it was self-defense.

During the race the Claremore runs out of wood. The New Moses notices the chief engineer Efe (Francis Ford) is a bit tipsy from drinking the medicine and they use the rum-based medicine in place of the wood and get to win the race and save John in time.

The funniest one in the film, like it or not, was not Will Rogers but Stepin Fetchit, seen as the “shufflin’ Negro” stereotype, as he helps Dr. John win the race. Though even back then attacked by civil rights groups for taking parts that belittled his race (but it should be understood in those days blacks couldn’t get other parts). Nevertheless, he became the first Negro actor to become a millionaire. 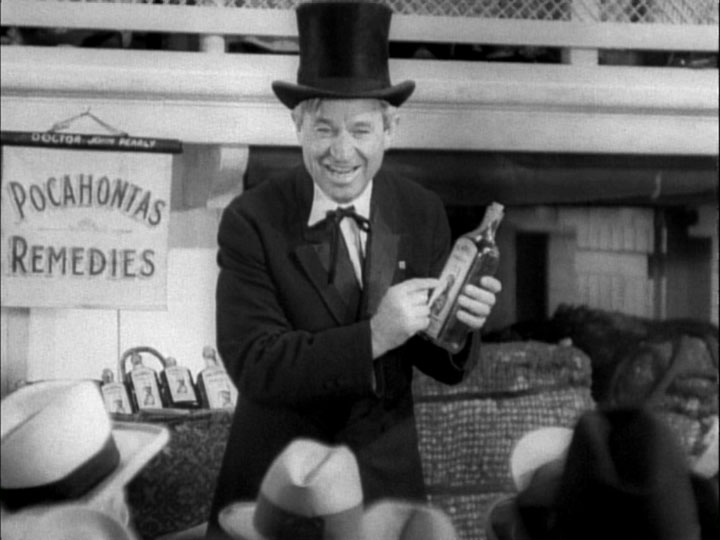