“It had no craziness to it… and…its false sense of piety to its subject ruined the whole point of the film.”

A look back at the 1960’s Yippie radical-leader Abby Hoffman. The film traces his involvement in the protest issues of the time, his marriage, and life underground. It meant well, showing the charismatic Abby in the best possible light as the ’60’s prankster symbol of an anarchistic, ecstatic, anti-establishment revolution; but, this cliché biopic failed to be emotionally involving. It had no craziness to it… and…its false sense of piety to its subject ruined the whole point of the film.

I read Hoffman’s Steal This Book! and found it to be childish, self-promotional drivel, telling of such things as how you can get a free meal in a restaurant by putting hairs and insects on your dish just before you finish your meal.

The film, adapted from two books — Abbie and Anita Hoffman’s “To America With Love: Letters From the Underground” and Marty Jezer’s “Abbie Hoffman: American Rebel” — was too goody-goody in its approach to capture either the mood of the changing times or the manic-depressive mood swings of the publicity hound, who thought of himself as a hippie organizer. Admittedly, making a film about the ’60s (in this film Abbie’s starry-eyed days were between 1967-70) is not easy to do because of the problem of making a satire about what was a satire to begin with. But this film was so poorly scripted, directed and acted, that it is worse than most films about that era. It succeeds only as a muddled attempt to bring to light some of the illegal practices the FBI and CIA imposed in trying to eliminate the leftist movement in this country.

Abbie tells his story to an alternate press reporter of no reputation (Alan Van Sprang), in 1977, who works for an unnamed publication. Abbie, as always working the media, wants to get out his side of the story while on the run. The story awkwardly unfolds via flashbacks and voice-over of how he was forced to live as a fugitive, taking menial jobs, living a lonely existence, becoming increasingly depressed, and frequently changing locations as paranoia set in.

Hoffman (Vincent D’Onofrio) met his future wife Anita (Janeane Garofalo) when as a prank he held up a NYC bus dressed in cowboy garb and robbed the passengers only of clothes to give to his Free Store. He performed guerrilla theater throughout his heyday of protests for civil rights and the antiwar movements: He held a rally at the Pentagon to exorcise its evil spirits and placed flowers inside the soldiers’ rifle barrels while calling for them to join him; he got married in Central Park, sending out invitations to strangers with marijuana cigarettes enclosed; he threw dollar bills onto the New York Stock Exchange floor, upsetting the trading activities; he nominated a pig for president on the streets of the 1968 Democratic Convention; he made a mockery of the Chicago Seven trial—by dressing up in judicial robes and asking the jurors if they ever heard of Janis Joplin, and poked fun of the witless judge; he upset many people by dressing up in the American flag and desecrating it during demonstrations. As a result of all the publicity he became the most recognizable person in the counter-culture movement, yet he still couldn’t make a living.

The film runs through a laundry list of all his radical accomplishments and tells of his relationship with another radical hippie figure Jerry Rubin, which turned sour after Chicago. The film shows him getting busted in a cocaine raid because of his naiveté in not believing he could be so hated and that the government will not cease in its efforts to ruin him. He chooses to go underground in 1974 rather than face a possible long prison term. He lived on the run under various disguises for the next seven years as “Barry Freed.” He even became an environmental activist in his upstate New York community and was honored by Senator Moynihan for his efforts to save the St. Lawrence. After being separated from his wife and child and living with a mistress (Jeanne Tripplehorn), he was glad to accept in 1980 — what his lawyer Gerald Lefcourt (Kevin Pollak) who defended him for no fee throughout all his troubles was able to get for him. It was a deal with the government, whereby he surrendered and spent a short stint in a federal prison. Nine years later he died, as a probable suicide.

D’Onofrio, who is a big man, does not physically resemble the much smaller Hoffman, and his Boston accent sounded artificial. He does bring an energy, but it seems misplaced. The one thing Abbie had going for him was a sense for the comical. That seem nonexistent, here. The script is self-serving to Abby and his lawyer, so much so that it made the whole project suspect.

The only thing D’Onofrio does well, is steal this movie for himself. All the other roles were flatly played and had no impact. 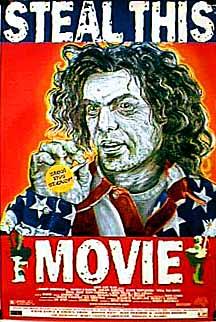