“Both Teller and Woodley are engaging actors who put forth their character’s struggles with tremendous conviction and guile.”

Director James Pondsoldt(“Smashed”/”Off The Black”) bases this coming-of-age teenage angst driven sitcom on the 2008 novel by Tim Tharp and it’s adapted to the big screen by the same team of Scott Neustadter and Michael H. Weber that gave us (500) Days of Summer. The grand design here is to make the familiar identity issues and parental relationship questions of modern teens be understood by adults, look different than the typical teen flick even if covering the same turf, and sincerely reflect the attitudes of the teens observed. In all that it takes a few necessary risky steps forward before taking a more questionable cautious step back in its sermonizing squishy conclusion. It was shot in the Yale graduate Pondsoldt’s hometown of Athens, Georgia, that gives it the look of the unnamed idealized integrated suburban community it features in the film.

Sutter Keely (Miles Teller) is a free-spirit, poor decision-maker and aimless popular high school senior with the gift of gab, an affinity for charming people, hanging with the in-crowd, and suffering from a masked drinking problem whereby he covers up his fears of failure.Dumped by his perfect girlfriend Cassidy (Brie Larson) over a misunderstanding, she now hangs out with black football star (Dayo Okeniyi) in a possible romantic relationship. This leaves the distraught Sutter waking up drunk one morning on the lawn of a stranger’s house. There he meets ‘on the cute’ his high school classmate, Aimee Finckley (Shailene Woodley), the sci-fi bookworm. She’s sweet, bright and an unpopular nice girl, working a paper route. The opposites begin an unlikely cautious relationship, with the naive Aimee helping the failing Sutter in geometry and Sutter helping to loosen up the senior class dork to be more aggressive in speaking up to her bossy mom.

It takes a long time for us to see how much damage was done to Sutter by his self-absorbed barfly father (Kyle Chandler), who abandoned the family when his only son was a youngster. This took the life out of Sutter’s hard-working hospital receptionist beleaguered mother (Jennifer Jason Leigh) and left his older comfortably married sister (Mary Elizabeth Winstead) frosty to dad. When Sutter and Aimee visit his father in a town a few hours away, we understand why his mom kept him away from dad all these years. It becomes apparent, even to the fun-loving Sutter, that he must change and become more responsible or he will end up a dead-beat just like his lush father. It also becomes apparent that Aimee is the perfect match for him, but it takes a few more dramatic scenes and some words of wisdom from mom to make the troubled youngster see that he doesn’t have to be like his dad.

The pic excels in parts because both Teller and Woodley are engaging actors who put forth their character’s struggles with tremendous conviction and guile, but the story loses its natural flow and turns sentimental in the over-played visit to dad scenes. They bring out a few heavy-handed predictable messages relating to the perils of alcohol and of ruining relationships by being unfaithful. 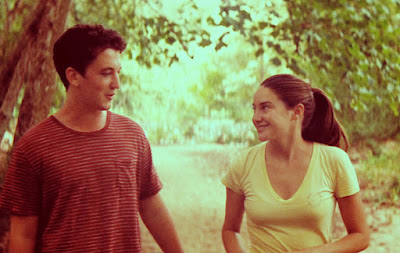