“Ineffective wartime flag-waver that’s all over the map as both a spy story and a woman’s pic.”

Ineffective wartime flag-waver that’s all over the map as both a spy story and a woman’s pic. It also suffers from poor casting; John Wayne is a cowboy out of his range. Jules Dassin directs his first ‘A’ film, which bombed in the box office sending him back to B films; it’s based on a story by Leslie Bush-Fekete and written by Jan Lustig.

France falls in 1940 to the Nazis. The wealthy born Michelle de la Becque (Joan Crawford) is spoiled rotten–more interested in wearing the most fashionable dress than in politics. It only upsets her that war interferes with her fancy lifestyle. Robert Cortot (Philip Dorn) is a self-made wealthy industrial designer, who is engaged to Michelle. Their lovey-dovey rap is so icky it could make you puke. Separated at the time of the Nazi invasion of Paris, Michelle returns from the South of France to find her Robert has supposedly made a deal with the Nazis and is living well despite his country’s sufferings. Michelle reveals herself as firmly anti-Nazi and rejects Robert’s offer of living comfortably in Paris despite her mansion commandeered by the Nazis to be used as a headquarters site.

Since her funds were confiscated, Michelle gets a job in the fancy designing house she used to frequent (Ava Gardner has an uncredited part as a salesgirl). While walking home, Michelle shields downed American RAF flyer Pat Talbot (John Wayne) from the Gestapo. She will shelter him and soon falls for him. When Pat fails in an escape to return to England, Michelle gets unexpected help from Robert. After some difficulties and a Nazi chase, Pat returns to England. Michelle learns that her Robert is working for the Resistance–doing his best to sabotage the Nazi war machine and helping many pilots escape. Michelle and Robert now get back together and work to defeat the Nazis.

The film makes sure Crawford is dressed in style despite her refugee circumstances in occupied France, which gives it a phony look. It’s a glossy fluff film that does an injustice to its serious background story of wartime Paris by not dealing with it in an more urgent manner. 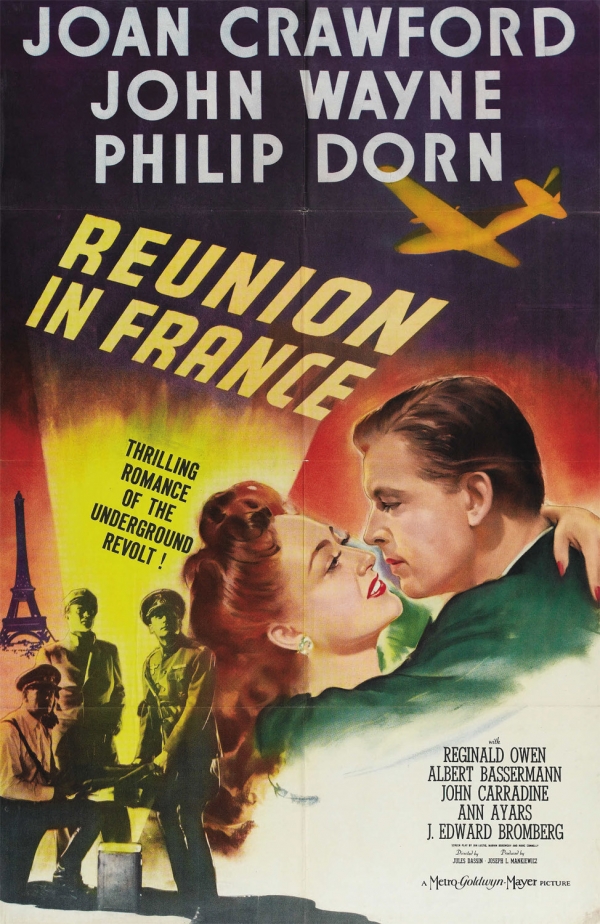