LIFE AND TIMES OF HANK GREENBERG, THE

It could almost be viewed like ESPN’s documentary ‘When Baseball was a Game.’ In this Depression-era nostalgia piece about a genuine Jewish baseball superstar, the first one who openly said he was Jewish and wouldn’t change his name, the game becomes much more than what it is. It becomes a look at the social and political climate of America just as much as a baseball biography. This breezy documentary by the woman director, Aviva Kempner, which took her 12 years to get enough funds to release it, sings the praises of the likable original “Hammering Hank,” a baseball Hall of Fame slugger and an heroic figure among his Jewish fans. It also relates the anti-Semitism that was present in baseball during the 1930s and 1940s. He was hailed as a messiah by the Jewish community, a counter argument against those who never imagined a Jew could be such a physical player and a star in America’s game. He broke the stereotype people had of Jews because of his natural ability and physical presence. Alan Dershowitz, the infamous lawyer, says that he was the most important Jew of that period, giving hope to all the others through his accomplishments, allowing them to think that they could fit into the mainstream. He was articulate, a great player, a great role model, had a great work ethic, and though not a religious Jew he realized how important his heritage was and how others looked up to him to do what is right; and, he therefore would not play on Yom Kippur, even during a pennant race. He gained the respect of the American public for his convictions.

Born in 1911, in the Bronx, to Roumanian immigrant parents, he grew to six-foot-four-inches while at James Monroe H.S. and attracted baseball scouts from the hometown New York Yankees and the Detroit Tigers, but wisely chose to sign with the Tigers because the great Lou Gehrig was a fixture at first base for the Yanks. Also, the Tiger scout promised his parents that they will let him go to college. But baseball was in Hank’s blood and he signed a bonus to play with Detroit forgoing his education at N.Y.U.. After a short stint in the minors, he was called up to the big club for the 1933 season. He immediately became a star player, playing on an infield that had the great second baseman Charlie Gehringer; it was an infield that would eventually set a record for most r.b.i’s. The team was good enough to win the pennant in 1934 and give life to a town that was hit hard by the Depression. Detroit was also noted for having two of the most vociferous anti-Semites in the country, Henry Ford and Father Coughlin. It also had some bigoted fans who couldn’t accept him, calling him a sheenie and a kike from the stands. But most of the vicious taunts came from opposing teams, who all employed bench jockeys to call him anti-Semitic names. Of all the white ballplayers, he was picked on the most because of his religion. Interestingly, Jackie Robinson came up in 1947 the same year Hank called it quits. Jackie went on to break the color-line and was the only player to receive a harder time than Hank. It was as if Hank was passing the baton to Jackie.

Hank was the first ballplayer to earn $100,000, which came during his last season when he was suspiciously traded to the Pittsburgh Pirates on the whim of Tiger owner Mr. Briggs and not allowed to end his career with the Tigers.

Greenberg’s accomplishments on the ballfield are legendary. During the 1938 season, he was chasing Babe Ruth’s 60 home-run record, and ended up hitting 58 homers. He was the team leader that helped power the Tigers to consecutive pennants in 1934 and 1935, as the Tigers won their first World Series in ’35. In 1945, after being the first ballplayer to enlist in the service, he returned from World War 11 to lead the Tigers to another pennant. Hank was proudest of the runs he drove in. One year he drove in 183 runs, one less than the record held by Gehrig. He also became the first man to win MVP awards at two positions, first base and left field. There is no doubt about it, Hank was an inspiration to many people who needed such a heroic figure.

This film had a very skillful way of telling its story about a bygone era doing it in an effortlessly grand style, with a tongue-in-cheek humor. Hank was a class act, never openly complaining about what difficulties he went through. He never even complains about how the pitchers stopped pitching to him when he was closing in on the Babe.

Hank became living proof of Jewish acceptance in America. This documentary makes use of the ones who loved Hank by interviews with his family, his fans, other players, sports writers, and celebrities.

The only fault was that the director became too close to her subject and perhaps, over-dramatized the effects of Greenberg. Though he was the ultimate Jewish sports hero of the time, there were many others who played important roles in allowing the Jews to become more easily accepted into the American mainstream. The conclusion of WW11 also had a lot to do with the change of America’s attitude toward Jews. 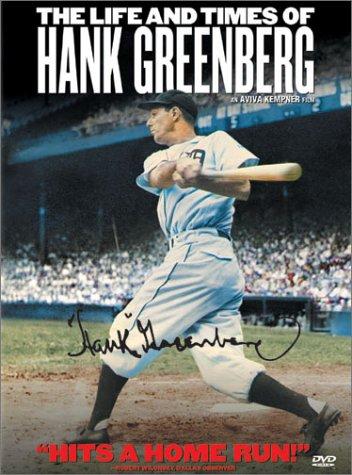