“Too preposterous to mean much.”

Spartan is a far-fetched political thriller written and directed by David Mamet (”State and Main”/”Heist”). The director is more interested in flexing his skills in filmmaking technique than in making a great film. There’s plenty of familiar staccato Mamet-speak, film noir clichés, and plot surprises. The implausible story keeps plausible for at least half the film before it takes us into ‘never, never land.’ It never connects with any emotional feeling for all the cold characters it pays lip service to, as it uses them as ciphers (good vs. evil) and plays with the modern world’s fears and disgust of middle-east terrorists to get under the viewer’s skin.

Veteran no-nonsense special-operations officer Robert Scott (Val Kilmer) is first seen training Ranger Army recruits for a special mission. Soon the Secret Service assigns Scott to head the investigation in Cambridge, Massachusetts, where Laura Newton (Kristen Bell), a Harvard student, the daughter of a high-ranking politician is missing. Scott soon learns she was taken by an international white slavery ring and that he has two days to find the girl before the press gets hold of the story, as the publicity will increase her dangers. Scott, a lone wolf, recruits on his team a green gung-ho recruit named Curtis (Derek Luke) and a tough-minded Sergeant Jackie Black (Tia Texada), who insists she be part of the team to rescue a ‘fellow’ woman in trouble. These are the three good guys in this convoluted conspiracy story, involving federal-agents Stoddard (William H. Macy) and Burch (Ed O’Neill) as the designated bad guys.

The Arab ring didn’t even know of Laura’s prominent father, but only wanted her because she’s young and blonde.

Soon the Secret Service verifies that Laura Newton was the dead girl involved in a boating accident in the water off Martha’s Vineyard. This closes the kidnapping case as far as they are concerned, but Curtis shows Scott evidence to the contrary. Scott learns that there’s a cover-up involved through the political spin machine linking the press with top governmental officials. The big-shot’s handlers hope to keep his whorish daughter out of the news where there’s the possibility of ruining the womanizer’s re-election chances (it’s broadly hinted that dad’s the President). As for DNA proof, Scott is told “You don’t have to fake DNA — you issue a press release.” The incensed Scott becomes a one-man team (just like Arnold Schwarzenegger before he gave up his action roles to play the part of a governor) and goes after Laura in the Arab country she’s been taken to.

The final half-hour was as nonsensical and brain dead as any of a host of such plodding thrillers Hollywood regularly ships off to the multiplexes, much like any of those heavy-handed Tom Clancy thrillers put to film with the hopes of scoring big in the box office. Mamet aims not for the box office but to score points as the lone voice of the left. He uses the clumsy payoff to say what he really means politically, that even more wretched than those slimy Arab terrorist white-slavers are those power-hungry Washington politicians who can’t be trusted. Mamet may be right but this abstract thriller, posing as a thinking man’s thriller, was too preposterous to mean much. 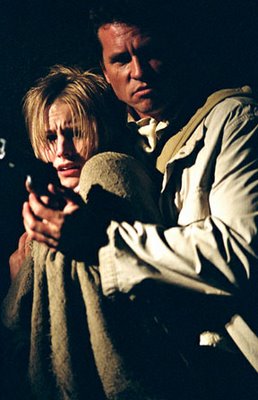 PAINTER AND THE THIEF, THE