This Rex Harrison feature is based on the novel “A Case to Answer” by Edgar Lustgarten. W.E. Fairchild and the American Nunnally Johnson co-script it; it comes under the dual direction of Anthony Bushell (he produces and is also Harrison’s defense lawyer) and Reginald Beck. The real-life married couple Rex Harrison and Lilli Palmer play a married couple, whose love is tested. It’s interesting to note that Harrison was involved in a well-publicized affair with the actress Carole Landis. When Rex refused to divorce Lilli, a heart-broken Landis committed suicide in 1948 and Harrison became persona non grata in Hollywood. With that in mind, the couple seem perfect for their parts in this thriller involving adultery.

The Long Dark Hall is a courtroom drama about a naive suburban family man, Arthur Groome (Rex Harrison), who is arrested for the murder of his London chorus-girl mistress Rose Mallory (Patricia Wayne). We know he’s innocent because we see the psycho who stabs Rose to death in her Earls Court apartment. Though hurt by her hubby’s philandering, Groome’s wife Mary (Lilli Palmer) remains loyal. But when a witness who could free him by providing evidence that he was at a restaurant during the time of the murder listens to his nagging wife and refuses to testify, the jury convicts Groome on circumstantial evidence and he’s sentenced to death.

It’s terribly spoiled by a contrived trick ending. Though the happy ending is pleasing, it comes out of the blue and is awkwardly presented. 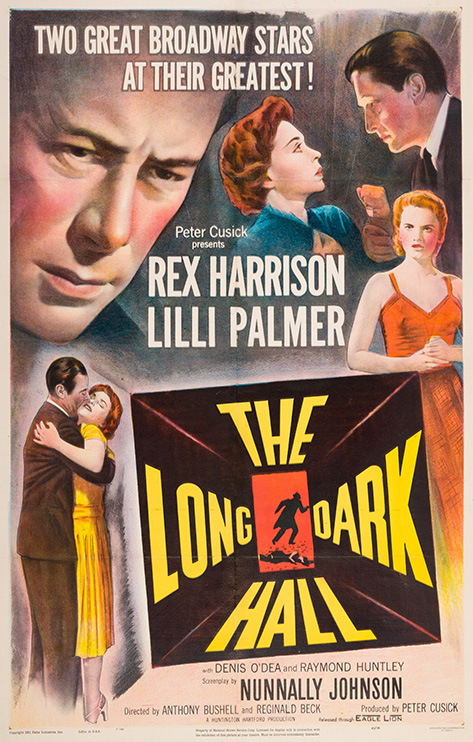