The sickly, intellectual Ester (Ingrid Thulin), a translator, and her attractive, sensual younger sister Anna (Gunnel Lindblom)–along with Anna’s ten-year-old son Johan, are traveling by train for some unmentioned reason on a stifling hot summer day through a fictitious Slavic-like European country that speaks an unrecognizable language and has a heavy military presence in the streets indicating it might be on the brink of war. The threedisembark so thatEster can rest up in a hotel room from herbronchial attack, where they share a hotel suite in a luxury hotel that is empty except for a seven act dwarf circus troupe.

Anna finds the room too hot and her sister’s attachment too stifling, and bolts out dressed in evening clothes to go to a nightclub as she selfishly abandons both her son and sister. The bedridden Ester smokes and boozes it up to kill time and forget her pain. Johan walks the long hall and befriends the elderly waiter and catches the attention of the playful dwarfs.

The carefree Anna, defined by her physicality, incurs the wrath of her lesbian sister, defined by her need to put everything into words, when she brings home a bar pickup for casual sex in the hotel suite. Johan is torn with affection for his vibrant mom but as time passes develops a liking for Ester, relating his loneliness to her loneliness. It concludes with Anna the next day boarding the train, with Johan in tow and clutching a letter of translations for the trip Ester gave him. The waiter stays with Ester and offers her more warmth and companionship than sis could muster while they shared the room.

The scenes that were considered shocking back in the day include Thulin masturbating, the story of a couple having sex at a cinema and the young boy washing mom’s back while she bathes. Johan becomes the eyes of the film, as it’s through his eyes that we view both women in a cold clinical-like study of how emotionally adrift we can become from one another. It doesn’t always work, but on the whole it has a strange fascination that lets us know that in a Godless world according to Bergman we humans must provide our own tenderness, warmth and love in order to make it through the night. 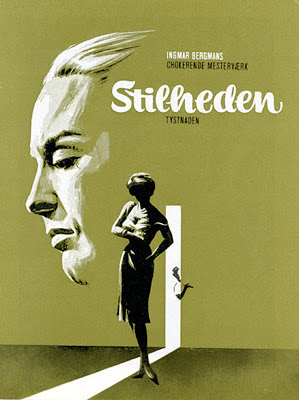 IN THE MOUTH OF MADNESS