“A routine war drama set just before the Battle of El Alamein.”

A routine war drama set just before the Battle of El Alamein, in Africa, 1943. The Nazi general Rommel finds a key Nazi petrol dump is attacked by a gritty Brit patrol, on a 400 mile trek to Amara. The patrol is always under attack, but succeeds in its vital mission just before the attack on El Alamein is launched.

Featured players are the two Brit captains, the martinet one played by land mine expert John Gregson and the more relaxed one played by the Eight Army’s ‘Long Range Desert Group’ commander Michael Craig. Richard Attenborough stars as the rogue leader of a bunch of pirate soldiers. It resounds with the usual heroics expected in war films.

It was shot on location in Tripolitania, Libya.

Guy Green(“A Patch of Blue”/”Light in the Piazza”/”Luther”) crisply directs the action sequences and lyrically captures the loneliness faced by the soldiers in desert battle. It’s based on the story by Sean Fielding and written by Robert Westerby.

The truncated version was released three years later in the States as Desert Patrol. 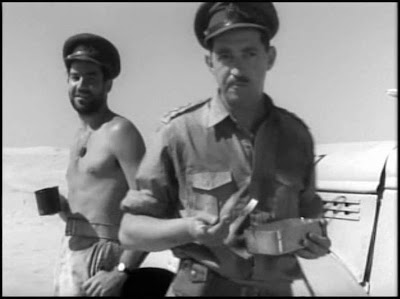