MAN WHO CAME TO DINNER, THE

“The great cast mirthfully brings on the savage dialogue and relishes in the malicious nature of the satire.”

A witty screwball comedy based on the play by Moss Hart & George Kaufman; the acerbic screenplay is by twin brothers Julius J. Epstein & Philip G. Epstein. It’s based loosely on waspish theater critic Alexander Woollcott (Woolley), while it caricatures other showbiz characters such as Noel Coward (Gardiner), Harpo Marx (Durante) and Tallulah Bankhead/Gertrude Lawrence (Sheridan). Its only problem is the uninspired helmsmanship by William Keighley but, nevertheless, the great cast mirthfully brings on the savage dialogue and relishes in the malicious nature of the satire.

While popular author and radio host Sheridan Whiteside (Monty Woolley) is on a Christmas season lecture tour, he slips on the ice and fractures his hip while invited to reside for his Mesalia, Ohio, lecture stopover at the residence of the admiring ditsy housewife Daisy and the resentful factory owner Ernest Stanley (Billie Burke & Grant Mitchell). Stuck in a wheelchair the acid-tongued curmudgeon does a nasty on everyone, as he makes himself at home while making the Stanleys unwelcome in their own home as he commandeers the main rooms and orders them to keep out. He’s surrounded by those who cater to his every whim, including his loyal longtime secretary Maggie Cutler (Bette Davis), his befuddled nurse Preen (Mary Wickes), the local-yokel doctor Bradley, the Stanleys’ two young adult children June and Richard, and the efficient maid Sarah and cook John.

Sheridan gives out with a steady stream of insults, cruel bon mots, and displays of utter contempt directed at his cowed hosts, as well as calling the famous people he knows from all over the globe–resulting in running up quite a tab on his long-distance phone calls. He also entertains guests ranging from convicts to his eccentric stage friends such as Banjo, and receives by crate a giant octopus and 4 penguins sent by Admiral Byrd from the South Pole. Though, after a month, bitterly complaining that he’s stuck in a philistine environment he discovers he can walk and his hip wasn’t fractured, but he tells no one and remains in his wheelchair. He makes the doctor promise to remain silent, as he tells him he will read his thick autobiography on being a doctor for forty years while here and judge if it’s fit for publication.

The radio host is a natural busybody who begins to meddle with the lives of everyone in the household, telling Stanleys’ daughter it’s alright to marry the union organizer in the factory over her Republican father’s objections and his son to run away and become a photographer. When Maggie falls in love with the handsome town newspaper reporter, Bert Jefferson, Sheridan tries to break the romance up so she won’t marry and quit. He calls his gold-digging vain actress friend, Lorraine Sheldon (Ann Sheridan), to leave her wealthy suitor in Palm Beach and convince Jefferson that she’s right for the play he wrote. The plan is to get the attractive Lorraine to woo Jefferson away from the plain Maggie. To counter this, Maggie gets stage actor Beverly Carlton (Reginald Gardiner) to imitate Lorraine’s suitor and ask for her hand in an immediate marriage in South Carolina. The only reason Sheridan hasn’t been given the boot, is because of the lawsuit he threatens and that he also threatens to reveal on his radio program that Mr. Stanleys’ nutty sister Harriet was once put away for being an axe murderer.

It’s delightfully wicked fun. A sampling of cynical dialogue goes like this — Nurse: “I am not only walking out on this case, Mr. Whiteside, I am going to work in a munitions factory. From now on, anything I can do to help exterminate the human race will fill me with the greatest of pleasure. If Florence Nightingale had ever nursed You, Mr. Whiteside, she would have married Jack the Ripper instead of founding the Red Cross!” 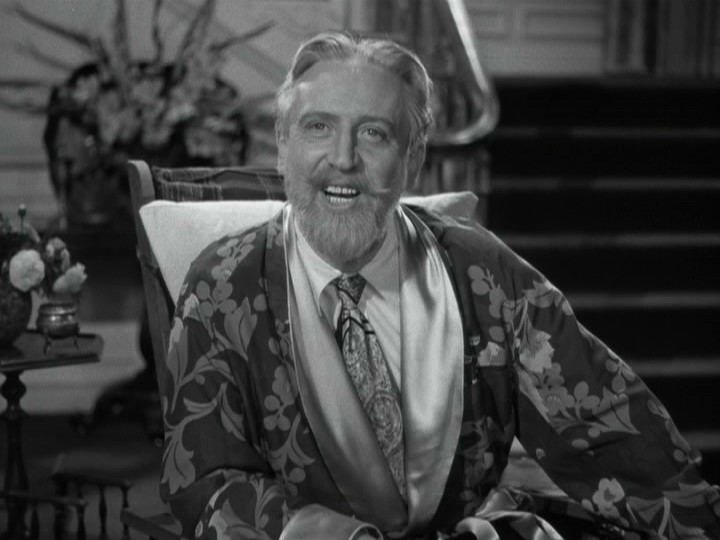