“Gets the spirit of Chekhov’s play.”

Director Sidney Lumet (“12 Angry Men”/”The Pawnbroker”/”The Hill”)has a go at Anton Chekhov’s signature 1895 play of unrequited love and moral degradation and gets the spirit of Chekhov’s play by being faithful to its tragic plot machinations. Lumet also has the benefit of a talented cast who perform rather well, but it’s slow-moving, downbeat, lacking a needed delicate touch and dull. Writer Baroness Moura Budberg, a real-life Russian aristocrat, works out an admirable screenplay that could have been better if it were more playful and less arch. Lumet gathers together a fine bunch of English thespians, but in a suspension of belief asks us to believe heavily French accented French actress Simone Signoret is the sister of the miscast English actor Harry Andrews (he’s hammy and overacts). It was filmed entirely at an idyllic lakeside Swedish retreat.

In a 19th century estate, in the remote Russian countryside, a cast of diverse characters congregate to put on plays, gossip, play games, complain, hate on each other, love the wrong people and destroy themselves. The self-centered Arkadina (Simone Signoret) is a middle-aged renown actress with a moody offbeat aspiring artistic writer son Konstantin (David Warner) and a 67-year-old ailing, melancholy and crotchety retired from the civil service brother named Sorin (Harry Andrews) who is forced for health reasons to live in the country even though he would rather be in the city. The bachelor Sorin lives permanently on the estate with Konstantin. The actress’s present lover is the Moscow popular hack writer Trigorin (James Mason), who is invited to the estate to watch an avant-garde play written by Arkadina’s son. Both mother and lover offer Konstantin no warmth or encouragement, even openly ripping the playwright for being pretentious. The play was written for aspiring actress Nina (Vanessa Redgrave), whom Konstantin madly loves even though she loves Trigorin. Nina’s the insecure daughter of an estate landlord neighbor. In a pivotal scene Konstantin kills a sea gull, which he gives to Nina and says that he will be in the same position soon.

Sorin has hired the bailiff (Ronald Radd) to look after the estate. The bailiff’s wife (Eileen Herlie, in her last performance in movies) has an ongoing affair with the worldly local 60-year-old country doctor (Denholm Elliott), while her aimless snuff-sniffing 22-year-old daughter Masha (Kathleen Widdoes), who is always dressed in a black mourning dress, futilely and secretly pines after the inattentive Konstantin and is being wooed by a nerdy school teacher (Alfred Lynch) she does not love.

At the end of the long weekend, the guests leave and some two years later they reconvene in Sorin’s estate when he becomes ill. We learn that between visits Nina ran off to Moscow to be with Trigorin but their relationship petered out after she gave birth to his child, and he’s still with Arkadina. Also during this period Masha has married the repulsive schoolteacher and Konstantin publishing under a pseudonym has gotten some attention from city folks. When Konstantin one night catches a glimpse of Nina secretly poking around in the garden, he runs out to meet her and declares his love. She rejects him, saying she only loves Trigorin. This prompts the unbalanced despondent Konstantin to commit suicide.

There’s comedy to be mined from this tragic play, but Lumet instead keeps it tense, depressing, and filled with unsympathetic neurotic characters. One of the neurotics, played with fragile reserve by Redgrave, identifies herself with a sea gull. 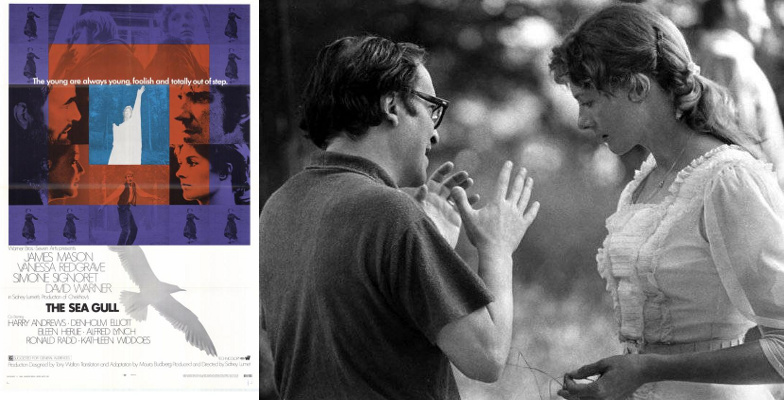