The often filmed story of Joan of Arc is attempted again by Jacques Rivette Up/Down/Fragile (95)/La Belle Noiseuse (91) /La Religieuse (65)/Celine et Julie vont en bateau (74)), and the results for this epic study of Joan are more than pleasing but less than scintillating.

Rivette was born in Rouen, France, in 1928 and it is interesting to note, that was the year when Dreyer’s magnificent silent version of Joan first appeared onscreen. Rivette started out as an assistant to Jean Renoir and later was a camera operator for Francois Truffaut and Eric Rohmer. He was a critic at Cahiers du Cinema and the much praised movie director is now considered to be one of the more noted unorthodox directors around, who will be forever associated with the French New Wave.

In Joan he divides the 336 minute film into two parts, The Battles and The Prison, each requiring a separate admission price and approaches the film mainly from an historical perspective, relying on dates and accuracy in detail in telling the tale of the peasant Joan’s (Sandrine Bonnaire) birth in 1412 and her reaction to hearing voices from God. It started upon hearing Saint Michael’s voice when she was 13 and persisted for the remainder of her life. Saint Catherine and Saint Marguerite were the other voices she heard, the ones who counseled her that she was chosen by God to save France from the English. The first part of the film will detail how she received from the Dauphin (Marcon) her command of the troops at Orleans until her victory over the English at Tourelles, with their general, Classidas, drowned in the Loire.

Sumptuously filmed in brilliant Technicolor, the film captures best the wonderful shades of France’s fall and wintery colors and its beautiful countryside.

In the film’s opening scene, the earnest maiden announces to the captain of the guard that she has been chosen by God to save France from the English and urges him to take her to see the king. Scenes shift as dates change and are so indicated onscreen. On Febuary 12, 1429, the maiden is escorted to Chinon to see the king. She is characterized as someone who is possessed by the voices she hears of God and of being a rabid nationalist. She wears a boy’s doublet, has her long girlish hair clipped short; and, at times, is given to girlish fits of giggling. We see her being transformed, right before our eyes, from the young girl she is into the soldier for God she envisions.

Rivette’s Joan is a sobering historical study, we don’t have the same intense passion for her as we do for Dreyer’s more spiritual and intense Joan. In this film, it is the king’s coldness and the church’s political intrigues that are played up more than Joan’s spiritual battles. Joan is given a warm treatment as a leader of the army. She comes across more like a naive pawn in the hands of evil politicians and church leaders, rather than someone who is imbued with an all-encompassing spirituality.

Joan meets the Dauphin without being introduced to him in a crowded room. This turns out to be a way of him testing her to see what powers this illiterate nineteen year old has, and it works out well as she is able to identify him and the future king takes a shine to her eagerness to get him crowned king in Rheims. That happens to be one of her visions that is to take place after she defeats the British in Orleans.

The king’s troubles began with his own mother disinheriting him and the impoverished state of his own financial affairs, which result in him being treated without all the due respect he feels he deserves by his subjects. The floundering country is in such a bad state, that it is about to be completely taken over by the British. Therefore he seems pleased to hear that this naive girl who comes to him with the vision of being the savior of France, is ready to go to battle for him.

Joan’s next test is to prove that she heard God’s voice, and this comes about when a group of clergy in Poitiers will question her for three weeks to authenticate her as a real visionary. She tells them what they want to hear: I dress like a man because that’s my job. Saint Michael speaks in the language of angels. My sign from God will be proven on the battlefield of Orleans. That satisfied the questioners as they stated she said nothing wrong and believes in God, and therefore they approve of her as God’s emissary for the king of France.

In April,1429 Joan looks at the British from across the river and is anxious to attack, but is met with cautionary responses from the French commander, The Bastard of Orleans (Patrick Le Mauff). He says we are outnumbered five-to-one and the wind is blowing the wrong way for our boats to move. Joan dismisses his courage and leadership, and looks elsewhere for support.

In a strong-armed soldier who walks with a limp, La Hire (Boucher), and in the Duke of Alencon (Jean-Pierre Lorit), the king’s relative, Joan meets at last bold soldiers who fiercely want to go into battle and they turn out to be just the kind of inspired soldiers she needs to gain her victory.

In May of 1429, Joan gets an arrow in the shoulder, but after a brief rest, continues the frenzied attack on the British until victory. The first part of the film ends on that high note.

With King Charles crowned as the French king, the church and state are shown sleeping in the same bed, politically speaking, and the king loses his appetite for further battle after being influenced by his inner circle of advisers to sign a truce with the British and forget about Paris. In June 1429 Joan embarks on a series of French victories over the English throughout the Loire Valley and when she is ready to seize Paris for her king, the king tells her to stop. Disappointed, but not rebelling against him as an authority figure, Joan goes on her own, no longer supported by the king financially, fighting in cities outside of Paris that are loyal to the English. It is now September of 1429 and all Joan’s troops are scattered in different directions, fighting on their own with limited resources. With a small band of troops she is captured in May 1430; and, is held prisoner by Prince Philippe, who is loyal to the British and detests King Charles for lopping off the head of his father, John the Fearless. In an arrangement made with the local bishop, she is sold to the British and put on trial for heresy by the church; it is a deal made in hell.

Caught in the web of a politics she perhaps refused to understand, Joan is faced with death at the stake if she doesn’t recant her statements of being God’s messenger on earth, wearing men’s clothes, and refusing to submit to the word of the church. By May of 1431, Joan is told by the bishop at Rouen to either abjure or burn at the cross. When Joan decides to save her skin and abjures she is shocked to see that the manipulative bishop has tricked her and pronounces a sentence of life imprisonment, with her to be kept in an English jail, where she is to be chained and to be given only bread for pain and water for her sorrows. When the English soldiers taunt and try to rape her, Joan has enough and tells the bishop she could have handled a church prison and lived with excommunication, but she would rather die than live in a British prison and not be allowed to hear mass. Joan says, “God has pity on me, I damned myself to save my life…but God sent me.”

Joan’s death sentence is assured. On May 30, 1431, she is dressed in a white sack cloth, wearing a white dunce hat, and given a simple cross made from a twig by an English soldier. In an act of hypocritical benevolence, the bishop allows her to receive Holy Communion for the last time. Joan’s death scene is as cold as stone, there are no outcries, the clergy remains adament that they did the right thing getting rid of this so-called virus in the church. The last word heard is from Joan, engulfed by the flames at the stake, as she cries out for Jesus.

This film followed the trial transcripts and used the recorded history of her battles to insure accuracy; but, it failed to move me in an intimate way as much as the Dreyer version did, which made more of a personal statement and had more of an artistic response to those in power who try to stifle the voice of an individual’s expression. While Rivette’s version is sympathetic toward Joan, I still get the feeling he has a healthy skepticism about the voices she hears and he is put off with her total obedience to church authority figures and is not completely sold on all those miracles that seemingly occurred. His film is mostly an original political response to Joan’s plight.

Perhaps Rivette’s opinion of Joan is encapsulated by his choice of Sandrine Bonnaire as Joan, someone who never lost her beauty and her girlishness; but, also was never convincing as a saintly figure. Her performance was more than acceptable, but it was not a memorable one. Rivette’s version is good to see as a companion piece to Dreyer, as they both have things in their films that the other never attempted and though Rivette’s version is colorful and politically savvy, it is not a masterpiece. It is just missing that magical ingredient, the something that Dreyer found when he went for the abstractions, the something that history couldn’t tell. 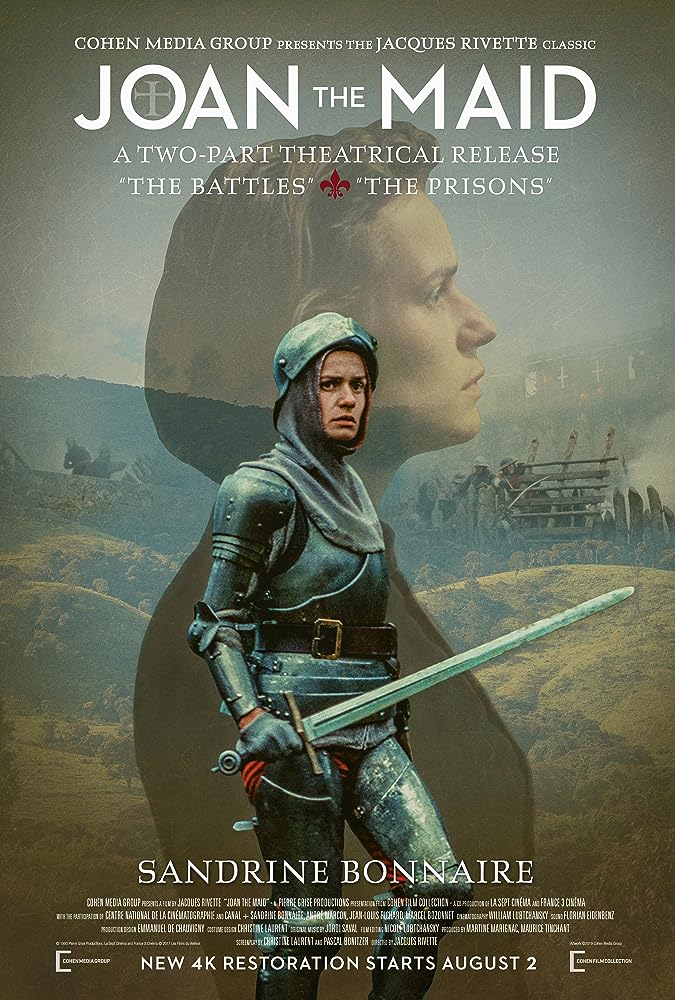