“Has a raw power that is disturbing.”

Ray Minton’s hard-hitting teleplay was banned by the BBC because of its unrelenting sadism. Subsequently it was released as a movie when Minton went to Alan Clarke (“The Firm’/”Made in Britain”/”Elephant “) and asked him to helm it. It depicts the injustices in a Borstal institution (reform school) and the brutality of being incarcerated in such a backward penal system. It plays like a docudrama as it relentlessly highlights a series of horrific violent acts and the blatant racism that strip the inmates of their dignity without rehabilitating them. The cast is made up of primarily unknowns.

The movie gets its name from inmate Carlin (Ray Winstone), who has just been transferred for striking an attacking screw and is referred to by the screws in his new home as scum. Carlin is brutalized by both the other boys and the system until he fights back against both. He fills a sock with a snooker ball and hits Richards (Phil Daniels), one of the bully lads who previously jumped him. Carlin then beats the living daylights out of the leader, Banks (John Blundell), who is alone in the latrine and tells him in no uncertain terms “I’m the Daddy now!”. From hereon Carlin rises to the top of the heap among the prisoners by using force. It leads to a climactic bloody riot, where the borstal boys protest against a “system” that treats in a beastly way both the keepers and the imprisoned.

The underlying message to all this violence is that reform is needed (which soon came about in real-life), but the film is such an unpleasant watch whereby it’s easy to miss the message and catch only the violence. It’s also hard to understand because of the thick Brit accents and all the jailbird jargon used. But for those who have the stomach for such messy things, it has a raw power that is disturbing. Through the years it built a rep as an uncompromising cult film. 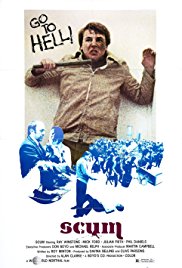