Korean indie animator, in his first live-action film, Sang-ho Yeon (“The King of Pigs”/”The Fake”), is the writer and director of this well-executed tense zombie train ride thriller.

It plays out as an allegory on class warfare and also shows the ill-effects of Korean capitalism because of greed. The filmmaker keeps it from being a blood-fest, as it blends into a social conscious film. But despite its zombie comic book look its vision is a dark one for its country.

Divorcee Seok-woo (Gong Yoo) is a snobbish big-shot fund manger in Seoul, who takes his estranged young daughter Su-an (Kim Su-an) to visit her mother in Busan. Upon boarding the KTX express train at Seoul Station a bunch of zombies appear and are blocked from entering. But a recently infected teenage girl sneaks on their train. Within minutes the infected girl finds her first victim and things become chaotic from hereon. What happens as the infected girl makes the rounds of the various train compartments gives the filmmaker a chance to voice his reactions to how snobbish and cold the elites behave.

The train has second class seats to serve the general population, while the first-class is reserved for the wealthy riders. One of the passengers escaping from the zombies is the sensitive bruiser working-class passenger Sang-hwa (Ma Dong-seok) and his pregnant wife Sung-kyu (Jung Yu-mi). They find the first-class passengers, looking out only for themselves, prevent them from entering their compartment by forcing the door shut. The “Train to Busan” is filled with many messages of how insensitive upper Korean society has become to the lower-classes. It lets us know that disasters can occur or are worsened because not all people cooperate to help each other.

Its message is more a conservative one than a startling one, and the film is mild in its political attacks on the privileged. But its treatment of how the zombie hoards become potent because they are rabid and act in groups, and only attack over loud sounds and only attack what they see, makes for many great fun set pieces.

Alas, the film calls for a renewal of family values and honest businessmen to regain the trust of a country rocked by such terrible disasters as the recent deadly ferry boat disaster caused by corrupt practices. 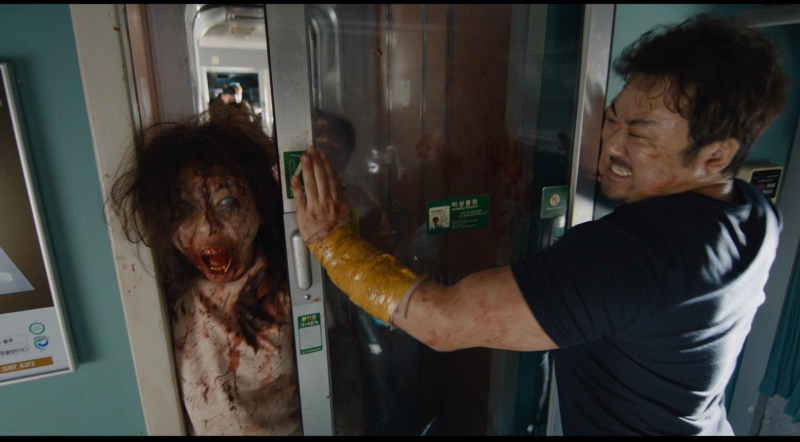