“Even though it has a few chilling and comical moments, overall it drags and doesn’t have much of a bite.”

An AIP Samuel Arkoff executive producer cheapie sequel to the crowd pleasing blaxploitation film Blacula, directed by William Crain. The public never warmed to the sequel as much as it did to its predecessor. It resurrects the modern-day African American version of Dracula in Los Angeles and crosses it with voodoo, with ultimately voodoo winning the day when both forces collide. Bob Kelljan (“Count Yorga, Vampire”/”The Return of Count Yorga”/”Flesh of My Flesh”) keeps the film’s potential best asset, Pam Grier, under wraps and further falters by a poor pacing job keeping the film flat and letting a good idea rot. It’s unimaginatively written by Maurice Jules, Raymond Koenig and Joan Torres. Shakespearean actor and opera singer William Marshall, noted for his deep, booming and eloquent voice, reprises his role from the original as Prince Mamuwalde/Blacula, and his odd performance, one of the best as a screen Dracula, becomes the only reason the film is still memorable. Character actor Richard Lawson comes aboard to play a pompous voodoo priest, who is around for comic relief and to be the villain an audience loves to hiss.

It opens as a group of African American voodoo practitioners mourn the death of their voodoo priestess. They chose to vote for a new leader because she didn’t pick a successor. The leader’s son Willis (Richard Lawson) objects and angers the group by his arrogant insistence that he should inherit the leader’s role. After he’s given the boot, the group follows their cult’s rule book and chooses by a vote the knowledgeable Lisa (Pam Grier) to be their new leader.

We then find a former voodoo priest, now defrocked as a ragman (Bernie Hamilton), selling to the disgruntled Willis a bag of bones for revenge, to get back at the group that bounced him. And when Willis evokes the bones he brings into play the black dracula figure of Blacula (William Marshall), who bites Willis on the neck and makes him his vampire servant—much to his chagrin. Blacula has been a vampire for two centuries after he fell victim to Dracula and really wishes to remove this eternal curse and return to Africa as Prince Mamuwalde. In the meantime Blacula goes on a killing spree, using his new recruits to do his bidding. When Blacula meets Lisa at a party celebrating her boyfriend’s African art collection, he believes her voodoo power can exorcise his curse. But Lisa’s LAPD forensic pathologist boyfriend, Justin (Don Mitchell), comes to her rescue when she’s threatened by the enraged vampire at the appearance of the cops in his home and gives Lisa time to work her magic on Blacula before he puts the bite on her.

Even though it has a few chilling and comical moments, overall it drags and doesn’t have much of a bite. 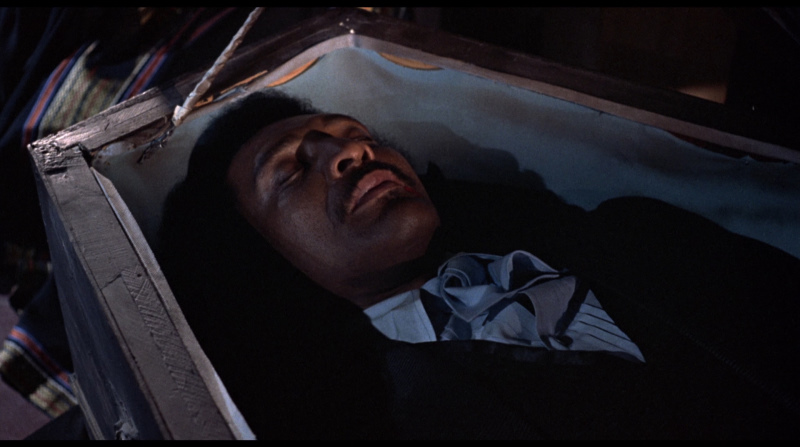