A very busy unassuming dramedy, with a Robert Altman-esque intertwining narrative structure, by Melbourne animator Sarah Watt (has being doing animated short films for the last fifteen years), who mixes animation and live action in her writer-director debut feature that’s preoccupied by how one handles catastrophes and comes to the sensible conclusion that each person handles it in their own way (which seemed obvious to me!). It deals with the taboo subject of death in both a serious and playfully idiosyncratic way, that courageously (but in a derivative way) tackles the subject people are fearful of talking about without pulling its punches yet keeping it crowd pleasing and fluffy. Its major problem is that the film went on for about twenty minutes too long and its inspirational message and repeated use of hand-painted animations were becoming increasingly grating (but not as much as that awful musical interlude) and by the film’s end it was close to being viewed like a Hallmark sympathy card.

Meryl (Justine Clarke), an artist who works as an illustrator of sympathy cards, returns to Adelaide by railroad from her dad’s funeral. The frumpy single lass regularly fantasizes impending doom to herself and others (like sharks devouring her), and we see these mind-trips in a vivid display of watercolor animations (drawn by Emma Kelly and inked by Watt and Clare Callinan). While walking home Meryl witnesses a man walking his dog along the tracks and envisions something tragic happening to him, when out of her sight the man actually gets run over by an oncoming train as he was on the tracks after his stray dog. This is the first time that she imagined a disaster and it’s actually come true. The local newspaper editor Phil (Andrew S. Gilbert) sends over journalist Andy Walker (Anthony Hayes) and photographer Nick (William McInnes, the director’s husband) to cover the story. Andy interviews Meryl but can’t understand it was just an accident and writes a story following his own agenda that most men are suicidal, while Nick takes a heartfelt photo of the widow which is used by the newspaper and the pain in her face contradicts Andy’s cynical story.

The tragedy deeply affects the victim’s grief-stricken wife and the guilt-ridden train engineer, but it also has an odd affect on others. The insensitive, divorced father of two, tabloid reporter, Andy, has just learned to his regret that his pretty black health-center worker sometime girlfriend Anna (Lisa Flanagan) is pregnant and must now decide if their relationship really matters. It also affects the photographer, who has just learned he has terminal testicular cancer and can empathize with someone else’s loss. As for the film’s heroine and the director’s alter ego, Meryl, she’s surrounded by death now in her real-life as well as in her imagination and is faced with a Monday deadline to finish some illustrations for a project she’s working on or else.

The Prince Charming hotshot photographer develops an unspoken rapport with the insecure artist and though they just met on Friday at the accident, by Saturday they sleep together and on Sunday she’s invited to dinner to meet his widowed mother (Nick’s independent-minded serene father died last year of cancer, which is the reason he came back from overseas to look after his mom). But by Monday morning Nick breaks Meryl’s heart and tells her he must end the relationship because there’s no future in it. The hot weekend also has a breaking national story about a major train wreck that took at least thirty lives, as it shows how impersonal tragedies can also come into our lives and have an affect on us. There’s the shot of Nick’s mom watching TV alone and smiling after learning the rescue workers miraculously found a little girl alive under the rubble. There’s also a recurring visual motif of flocks of birds in flight, in gimmicky images that I suppose symbolize all living things have in common that life is transitory. In any case, by Monday everything comes together in a whimsical manner as the shallow probing of death leaves us on our own to search out deeper truths–the film only manages to say that it’s better to openly discuss our fears about death than keep it to ourselves (and who can argue with that sentiment!). 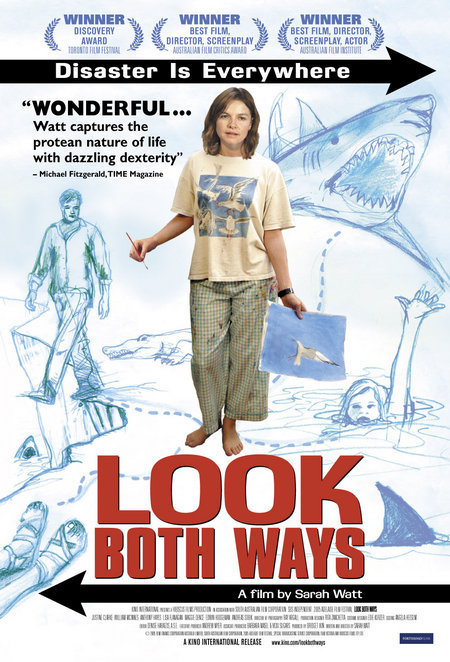