“Most gags are cooked on the raw side.”

An adult animation comedy that’s filled with offensive juvenile food jokes and cursing. Most gags are cooked on the raw side. It’s energetically co-directed by Conrad Vernon (“Monsters vs. Aliens”) and Greg Tiernan (“Mighty Messes”), who explore the secret lives of supermarket products. Rogen and Evan Goldberg write the screenplay from their story. Others contributing to the script include Kyle Hunter and Ariel Shaffirwhich. Frank (Seth Rogen) is a sausage link in the supermarket who has eyes for the hot-dog bun called Brenda (Kristen Wiig), sitting on a nearby shelf. Edward Norton scores as an argumentative Jewish bagel having a territorial dispute with an Arabic flatbread (David Krumholtz). Salma Hayek is a Sapphic taco who attempts to lure a straight innocent to take a walk on the wild side. Michael Cena is a diminutive sausage. The plot is built around jokes about food characters who have human feelings. The surprise is that there are serious asides to theology and faith amidst all the nonsense. It turns on Frank acting semi-religious, when seeking enlightenment over the problem of how an empty life awaits those in the outside world. The story is both smart and dumb, raunchy, subversive, and at times very funny. It works best as a parody of Pixar family animation films. 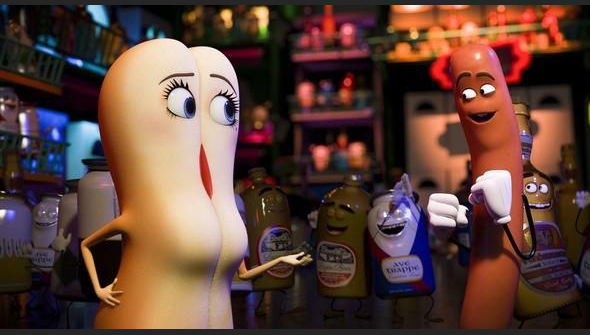 VOICE OF THE WHISTLER