“A poignant and amusing black and white filmed road trip that brings an estranged father and son together.”

Omaha-born director Alexander Payne(“The Descendants“/”Sideways“/”About Schmidt“) and first-time screenwriter Bob Nelson take us on a poignant and amusing black and white filmed road trip that brings an estranged father and son together, as they try to get on with their disappointing lives despite the current malaise for the American heartland and the difficulty now of living out the American Dream.

In Billings, Montana, the cantankerous, confused, alcoholic, and fragile elderly Woody Grant (Bruce Dern, age 77), a man of few words, can’t be talked out of believing he won a million dollars by his sensitive electronics salesman younger son David (Will Forte), his married ambitious local TV broadcaster son Ross (Bob Odenkirk), and his feisty out-spoken battle-axe wife Kate (June Squibb). Woody believes he’s a winner after he receives a scam magazine sweepstake- letter sent out as a marketing promotion. The literal-minded Woody believes he won because it said so and refuses to trust the mail to collect, and therefore goes directly to the prize office in Lincoln, Nebraska, to pick up his winnings even if he must walk there. David can’t allow dad to go on the fool’s errand alone, so he calls in sick to work and drives him there. They stop-over at dad’s Nebraska home-town of Hawthorne, where he reunites with his estranged brother (Rance Howard) and former chiseling auto shop partner he sold-out to at a bargain price, Ed Pegram (Stacy Keach). The former Korean vet, Woody, still secretly traumatized from the war, is too out of it and too generous to see these folks as they are. They flock to him like vultures when word leaks out he’s a millionaire. He also gets treated as a celebrity in town. Now that they think he’s rich, the more crass ones greedily descend on him for hand-outs. This becomes too much for David and he bonds with dad more than he ever did, as he forgives dad for all the years of neglect after witnessing what he endured.

Dern gives a fine performance as the ultra lovable character who never forces himself on us, in a bittersweet pic that goes all the way to Lincoln with its one-joke plotline while giving us a close-look at an economically depressed Nebraska. Angela McEwan has a nice role as the kind-hearted newspaper publisher and former girlfriend of Woody, while Devin Ratray and Tim Driscoll are hilarious as Woody’s thuggish and oafish relatives. 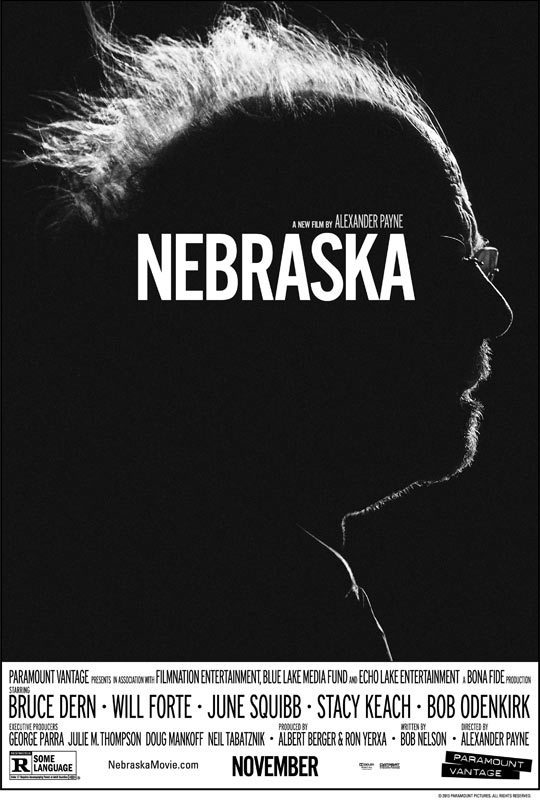