A better submarine film has not been made. The taut World War II adventure story, filmed in gorgeous black and white, features friction between Old School movie star Clark Gable as the commander of a submarine with the new Hollywood star Burt Lancaster as the executive officer, both playing strong-headed, competent and honorable Navy officers who want to command the submarine. Robert Wise (“The Sound of Music”/”The Set-Up”/”West Side Story”) wisely elicits all he can get from the boat’s claustrophobic conditions to build tension among the crew over the power dispute between the two officers and the dangerous mission of bringing down a prized Japanese destroyer on Japanese waters in the climactic sea battle. It’s based on the novel by Commander Edward L. Beach and is scripted by John Gay.

In the opening sequence, in 1942, veteran hard-nosed American submarine Commander Richardson (Clark Gable), in the Bungo Straits near the coast of Japan, is sunk by the Japanese destroyer Akikaze. Richardson is one of the few survivors, but feels humiliated he’s assigned as a desk jockey during the next year at Pearl Harbor. The obsessed commander is focused entirely on getting revenge on the destroyer and after he learns the Akikaze sunk four boats, talks the Navy board into giving him command of the Nerka submarine. The command had been promised to the ambitious younger Lieutenant Bledsoe (Burt Lancaster), who is upset with the decision that he’s assigned as the executive officer and asks for a transfer. That’s denied by Richardson.

The submarine is assigned to patrol Area 7, which contains the Bungo Straits, but with orders notto enter the straits. Meanwhile the crew is upset that their new commander has them drilling all the time and passing up attacking a submarine, believing Richardson is a coward. It soon becomes clear that Richardson is planning to have another fight with the Akikaze, as he practices by taking out an enemy destroyer and then enters the Bungo Straits by redefining his orders as is the captain’s privilege if he determines circumstances change that he must take advantage of.

In an ensuing sea fight Richardson gets severely wounded and before Bledsoe could take over in a mutiny, because Navy orders were disobeyed, Richardson is declared physically unfit for duty and Bledsoe assumes the command and goes after the destroyer. He’s helped by Richardson’s experience.

The only way not to like this authentic looking action film, with excellent sea fights, is if you don’t care for the submarine genre. Upon its release it didn’t do that well commercially, but over the years it has gained a reputation as a first-class war tale with star power. 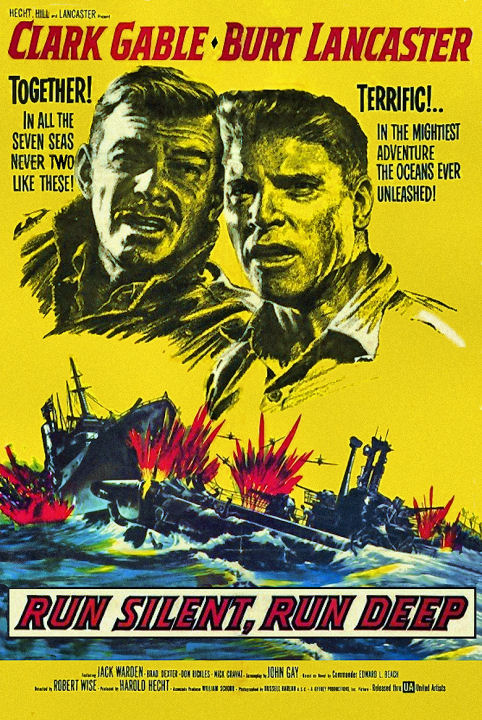