Intellectual, well-crafted, chilling horror pic helmed by the forgotten American director, who made over 100 films in a 50 year career, Erle C, Kenton (“They Meet Again”/”Devil’s Squadron”/”It Ain’t Hay”). It’s the silent screen filmmaker’s first important film. Writers Waldemar Young and Philip Wylie’s provide a loose interpretation of H. G. Wells’s 1896 book, “The Island of Dr. Moreau,” altering the novel’s lampooning of religion and its anti-vivisectionist tracts in favor of keeping it erotic and perverse (suggesting bestiality). Wells disdained the translation and the film, which was banned for years in England because of its suggestions of bestiality. But it turned out to be one of the best horror pics of the 1930s and Kenton’s best horror film. Also, the malevolent performance by Charles Laughton as the smug Dr. Moreau was brilliant, the b/w photography by Karl Struss was ravishing and the makeup from Wally Westmore was perfect. The three remakes, Terror is a Man (1959) and the two versions of Island of Dr. Moreau (1977/1996) are all clearly inferior.

Incidentally, the jungle scenes were filmed near the studio on Catalina Island.

Edward Parker (Richard Arlen) is rescued in the South Seas by a freighter after shipwrecked. He finds that the ship is carrying a cargo of animals. He also spots on the ship’s deck the weird looking M’Ling (Tetsu Komai), who has a fur-covered ear.

The crude drunkard captain (Stanley Fields) has bad vibes for Parker. When the captain punches M’Ling in the face for no reason, Parker needlessly comes to his rescue and knocks the captain out. Strangely, the captain’s attack on the freak has no effect on him. Later when the captain makes contact with the mad scientist Moreau’s ship and delivers to him his animal cargo, out of revenge he also dumps Parker onto the mad scientist’s ship and sails away before anything could be done about it. Moreau has aboard Montgomery (Arthur Hohl) and some beast-like men.

The eerie film builds an atmosphere of unease that only increases when on Moreau’s isolated island it’s learned animals undergo experiments turning them into beast-men. . The oddness of Moreau andthe natives and the intriguing weird visuals on the island are enough to spook out the viewer. The normal looking Moreau and Parker are viewed by the beast-men as gods. The film’s most memorable line has Moreau, while on an island tour with Parker, asks “Do you know what it means to feel like God?”

The cunning Moreau promises to lend Parker a sailing boat to get off the island, but never intends to keep that promise. We learn that Montgomery is an alcoholic who fled England over matters of medical ethics like abortions, and has received shelter by Moreau while forced to assist him in his edgy experiments. Lota (Kathleen Burke) is Moreau’s most successful creation. Even though Parker is engaged to Ruth Walker (Leila Hyams), who was to meet him in Apia, he’s seduced by Lota until noticing her panther-like claws and rejects the tearful Lota. It then dawns on Parker that his host can’t be trusted and he’s trapped on the island. A place where the mad scientist conducts in his “House of Pain” experiments that defy human ethics.

The film has a fantastic atmosphere and is created with great inventiveness. Bela Legosi, in a small but excellent performance, is the leader of the beast-men, who keeps them in line and obeying Moreau’s orders. One of the laws on the island is “not to run on all fours.”

Parker’s only hope of freedom is when his fiancee finds the captain who gave him to the despicable Moreau and after forcing him to say what happened to her boyfriend, gets Captain Donahue (Paul Hurst) to take her to Moreau’s safe haven island. Things go awry for Moreau when he arrogantly makes a critical error in judgment in humanity and his strange world, where humans and animals are comparable in their threats of violence, is resolved in an atmospheric frightening manner. 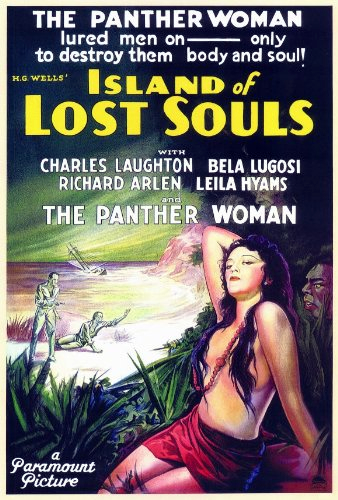