A rambling Western; the disappointing last film the seventysomething Howard Hawks directed features the sixtysomething John Wayne. The film is nostalgic, action-packed, somewhat humorous but, nevertheless, feels tired and well-worn. It’s the third leg on the loosely drawn trilogy of Rio Bravo (1959) and El Dorado (1967), all scripted by Leigh Brackett. Its best features are the grand photography by William H. Clothier and John Wayne’s performance as the legendary Duke.

Colonel Cord McNally (John Wayne) is a stalwart Union cavalry officer who chases after Confederates who robbed the gold shipment on the train and killed his officer friend. McNally gets captured by the Rebs when pursuing but turns the tables on them and captures their leader Captain Pierre ‘Frenchy’ Cordona (Jorge Rivero) and his aide Sergeant Tuscarora Phillips (Christopher Mitchum). The Rebs are held in a Union prison camp and when the war is soon over, they are released. McNally is pissed that there was a traitor in his outfit selling information to the Rebs. Not able to tell McNally the traitor’s name, the Rebs give him a description and promise to help him find the traitor as they return to Texas.

When McNally receives info from the Rebs that the two traitors are in Rio Lobo, he goes there and hunts the men down. One of them was killed by the feisty Shasta Delaney (Jennifer O’Neill) after they killed a man who was kind to her–her boss on the medicine wagon Charlie Simms. The other man is running things in Rio Lobo, the landowner who came there after the war, Ketcham (Victor French), and started forcing the ranchers to sell to him dirt cheap. Ketcham appointed the crooked sheriff Hendricks (Mike Henry) to do all his dirty work, after Hendricks killed the honest sheriff.

The third act has the ornery old-man Phillips (Jack Elam) side with McNally to go after Ketcham and his gang and prevent his ranch from being taken, to get back his son held in jail by the sheriff on trumped up charges, and to restore law and order to the town. The Colonel also is helped by a few pretty heroines and the two former Rebs, while the locals are too powerless to help until the end.

It turns into a bitter revenge film by the conclusion, losing its lighthearted and supposedly humorous intentions. There are only a few of Hawks’ touches that remind one of his other great films, though the film at times makes references to the other films and has some fun poking fun at the aging and overweight Wayne–even comparing him to a baby whale. 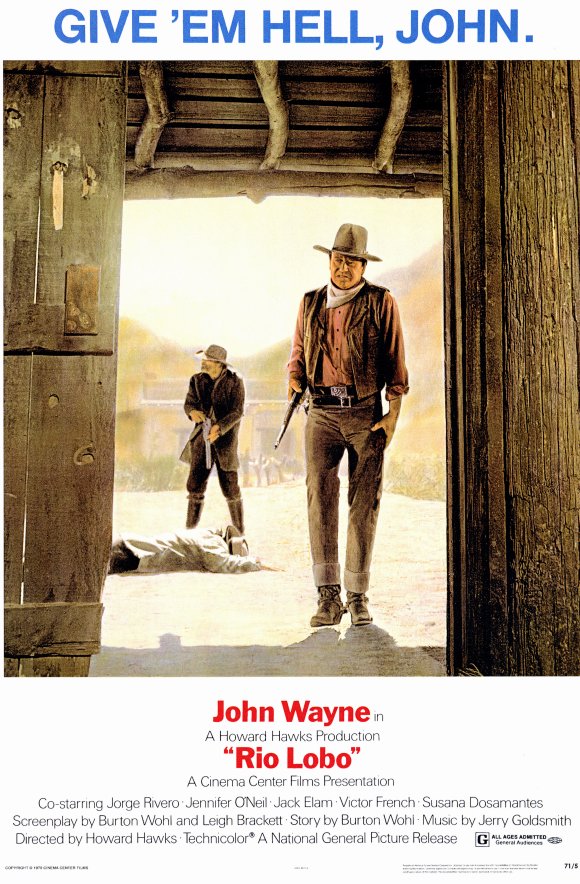