Director Sidney Lumet (“Network”/”Dog Day Afternoon”/”Garbo Talks”) turns his attention to the family and what bonds hold it together, in this well-acted, compelling, coming-of-age and political activism story. It’s the Lumet film I like best, where the at times heavy-handed liberal filmmaker is at his most instinctual in getting the most out of unforced conversations and only a few scenes are weakened by his too obvious clumsy ways. The poignant, intelligent and honest drama is written by Naomi Foner. It probes for answers on the pains of growing up, what are the family responsibilities to their children, the consequences of living with one’s past mistakes in a present world that has radically changed, how one’s actions can affect other lives and the commitment to keeping one’s youthful radical ideals despite the present difficulties of reaching middle-age.

The story revolves around a family forced to become fugitives, and who have the uncanny ability to leave a town at a moment’s notice to elude the FBI. In 1971, Arthur and Annie Pope (Judd Hirsch & Christine Lahti) were members of the radical Liberation Army and as an ‘act of conscience’ against the Vietnam War they bombed the research laboratory at the University of Massachusetts that was making napalm. A janitor, who was not supposed to be working at the time, was in the building and was accidentally blinded. The couple has been on the FBI’s most wanted list since, with newspaper clippings dubbing her as the ”Fugitive Deb.” With their two-year-old son Danny, the Popes went underground and as a cover posed as suburbanite middle-class folks in order to call no attention on themselves. Danny (River Phoenix) is now seventeen and is a promising classical pianist and Harry (Jonas Abry), another son, born while the couple was on-the-run, is ten.

Relocated in a Waterford, NJ, high school, Danny begins a romance with the daughter of his music teacher, Mr. Phillips (Ed Crowley), the rebellious teenager Lorna (Martha Plimpton). Tired of his family’s unstable and exhausting nomadic life of fleeing to various towns across the country and frequently changing identities, Danny is talked into applying at Julliard by his supportive teacher. When Danny passes his entrance audition and is accepted pending the reception of his missing school records, he must decide if he wants to leave his family and possibly never see them again.

Everything is handled with great sensitivity and truthfulness, as the performances are uniformly outstanding. River Phoenix, the heart of the pic, brilliantly plays the kid trapped in his parents’ bad karma who falls in love with the right girl and has the chance to make his own life in a career he has the love and talent for. The only thing is that he’s not sure if he wants to leave his family nest. Lahti in an understated performance is terrific as the warm-hearted mom, who left her privileged wealthy parents to follow her convictions; while Hirsch is the pained patriarch who sees no way of turning back the clock and is determined to have the family survive as a unit, even if it’s living a lie. 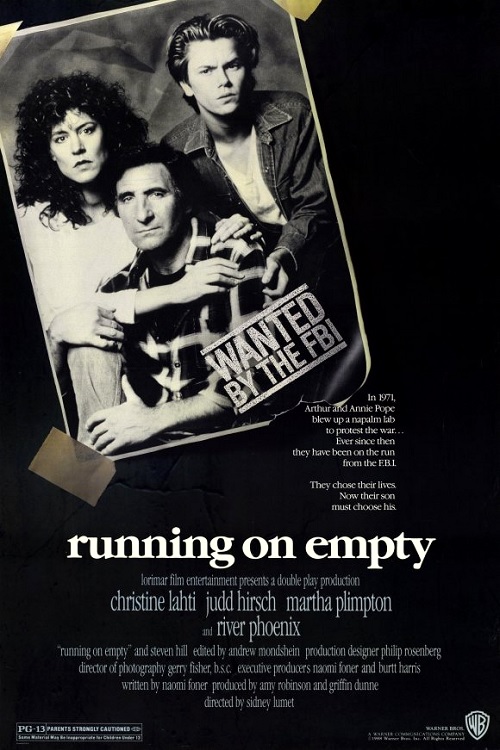