A modestly amusing caper film from producer, writer and director Val Guest (“Expresso Bongo”/”Hell is a City”/”The Quartermass Experiment”). It was the film debut for comedian Frankie Howerd. It resembles in plot Arnold Ridley’s play adapted to the screen by Walter Forde, The Ghost Train (1931 & 1941).

BOAC relief bus #13 is driven by the bumbling Percy Lamb (Frankie Howerd) during a severe fog covering London’s Heathrow Airport, as he tries to travel some two hours away to a fog clear alternate airport named Blackbushe since all planes have been grounded. The trip is arranged by BOAC when nasty passenger Miss Benton (Margaret Rutherford) insists that she must get to Dublin and puts up such a fuss that the airline officials capitulate to her demands. The other passengers include the diminutive milquetoast Mr. Waterman (Toke Townley), the mysterious Ernest Schroeder (George Coulouris), fun-loving crime detective reader Janie Grey (Belinda Lee), the shady pilot Peter Jones (Terence Alexander) and the perky stewardess ‘Nikki’ Nicholls (Petula Clark).

The bus, under Percy’s inept driving, gets lost in a village that has been mined by the army for training exercises, as Percy in the thick fog miraculously drives over a minefield. After that dangerous trip, they stop overnight at a deserted barn. When the driver is contacted by Inspector Henley (John Horsley), he’s told airport security has been robbed of £200,000 in gold bullion and the robbers have stored the gold in the bus’s trunk. Unable to give the location, Percy is further told to be on the alert as the criminal mastermind known as ‘The Banker’ and an accomplice are aboard. Also unknown to Percy, there are two incognito policemen aboard.

It might be lacking in sophistication, coherence and credibility, but it did have some funny moments and makes great use of scenes in the fogbound airport. 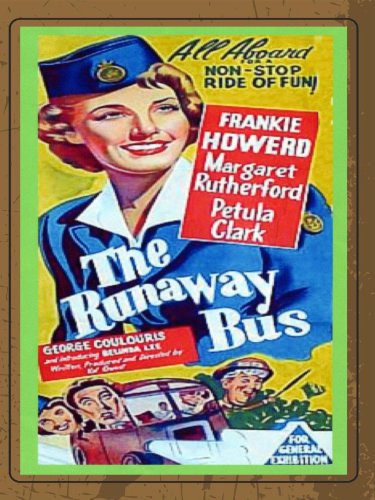