Italian writer-director Fulvio Wetzl, a wannabe Hitchcock but without the master’s touch, shoots Rorret as a film buff homage to the slasher film. The title is taken from terror spelled backward and the last name of the central character, Joseph Rorret (Lou Castel), the shy owner of a revival theater named the Peeping Tom that shows Hollywood fright flicks from the 1940s. In Rorret’s off-hours he’s a Peter Lorre lookalike psychopath who murders pretty women in the same way as in the films shown in his theater. Wetzl’s narrative drags once the thematic “joke” is established, that the nutso theater owner gets aroused watching from behind a screen his women patron’s fearful reactions to the fright flick shown and somehow arranges to meet them after stalking them. He will then copycat the movie’s snuff scene.

Cinephile Wetzl’s thriller never seems more than a film project exercise by an obsessed film student. His film measures itself against the likes of Vernon Zimmermann’s 1980 “Fade to Black,” Alfred Hitchcock’s ”Psycho,” and Michael Powell’s ”Peeping Tom.” Though Wetzl shows some talent re-creating the horror death scenes from the masters on his tiny budget, the film itself never had its own personality or enough going on to hold my interest. 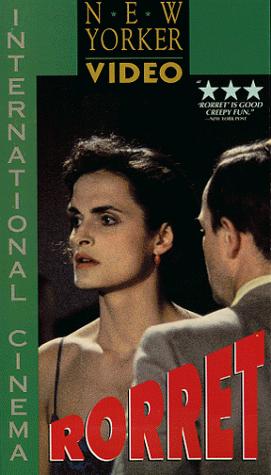