“An incredible timepiece concert film that’s a window into the rock scene of the 1960s.”

This classic rock concert film was shot in December of 1968 in a no-frills style by Michael Lindsay-Hogg and was filmed in a North London TV studio over a two-day period. Mick Jagger was the MC and organized it and set it in a circus-like atmosphere, with the featured rock bands dressed in colorful costumes (silly hats and smocks). It had acrobats, clowns and other big-top acts performing between sets. The Stones were joined on stage by Jethro Tull, the Who, Taj Mahal, Marianne Faithfull, and in a one-time only stint a group called Dirty Mac that were led by a seemingly stoned John Lennon and featured Eric Clapton (formerly of the Cream), Mitch Mitchell, and Keith Richard, and finally a screaming talentless Yoko Ono performed “Whole Lotta Yoko” accompanied by a violin player.

The film was reportedly never released until 1996 because The Rolling Stones were unhappy with their seemingly tired performance, and thought that The Who upstaged them. The Stones planned to re-film their performance but couldn’t because of the untimely death of group member Brian Jones. I didn’t see that The Who gave a greater performance and don’t know the reason for the 28 year delay, but it’s possible that the Stones’ explanation that they were sensitive to the death of Jones and chose not to release it might just be the simple truth (but, then again, who really cares!).

In any case, it’s an incredible timepiece concert film that’s a window into the rock scene of the 1960s. The music was great and featured such songs as the quirky Ian Anderson (Jethro Tull) singing “Song for Jeffrey,” The Who singing ”A Quick One While He’s Away,” Taj Mahal belting out “Ain’t That a Whole Lot of Love,” Marianne Faithfull inappropriately dressed in a black evening gown singing “Something Better,” Dirty Mac singing “Yer Blues,” and the Stones singing without their usual pep ”You Can’t Always Get What You Want,” “Sympathy for the Devil,” “Jumpin’ Jack Flash,” “Parachute Woman,” and ending the concert on ”Salt of the Earth.” 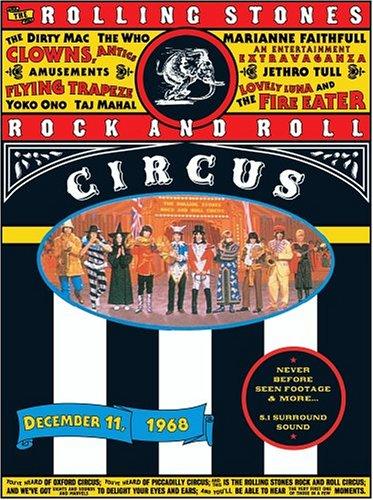