A splendid TV movie remake of Fritz Lang’s 1941 Man Hunt. Peter O’Toole is the aristocratic British hunter, Sir Robert Thorndyke, who attempts to assassinate Hitler in 1939, before war was declared. Thorndyke is caught outside Hitler’s vacation retreat and tortured, having the nails from his fingers torn off. When the Germans decide to make his death look like a hunting accident for political reasons and push him down a cliff, they are startled when he is not there the next day. In order to get out of Germany O’Toole gets help from a fisherman and then stows away on a British boat, which takes him back to London.

In London, O’Toole’s worries are not over. He is followed by German agents and realizes that he can’t remain at home and be safe. This thriller becomes very tense with O’Toole, an expert on hunting, now the one who is hunted. He gets help from his Jewish lawyer friend (Harold Pinter), and flees to the English countryside. But it is an adventure for him to get out of London, as he is followed in the underground and must elude a German agent who tries to kill him on Holborn Station. O’Toole manages to lay a trap and kill him, whereby the agent gets electrocuted. He now becomes wanted for murder.

While in Dorset he goes to the postmaster to pick up a letter from his lawyer, but the postmaster recognizes him from his sketch in the newspaper and calls the police. After escaping the police with a bullet in his shoulder he is trailed by two other Nazi pursuers, an anti-Semitic Major Quive-Smith (Standing) and his underling, Muller (Ian East), who just follows the orders the major gives him.

Quive-Smith corners him in the underground hole he was hiding in and tells him that he will kill him unless he signs this incriminating document he has prepared for him. Somehow O’Toole tricks him and manages to execute him and escape to safety. Back in London he talks with his uncle (Sim), and tells him about his escapade. His uncle, who worked for the maligned ex-prime minister, Neville Chamberland, tells him that the new prime minister, Winston Churchill, heard about him and would like to meet with him.

O’Toole’s performance is superlative. He is an eccentric of British royalty, displaying impeccable manners, and has a roguish way of looking at things. His attempt on Hitler’s life is an extraordinary thing to do…though why he does it is only given a fuzzy explanation that it is because of a woman he loved. Via flashback we learn that the woman he loved, Rebecca (Cyd), goes back to Germany and is executed by the Nazis.

Under Clive Donner’s direction, O’Toole grows into a character that is larger than his country. He is playing off his petulance, his wit and his charm, and he looks death in the eye and heroically escapes from his pursuers. What the filmmaker does, is have O’Toole make great scenes out of conventional ones. In one scene he is hiding in a dark hole talking more humanly to the black cat who keeps him company than he does to the turncoat major who unsuccessfully tries to converse with him like they are equals, but whose eyes bulge with hatred and whose life belies a sick interpretation of what the truth is. Even though O’Toole is the one trapped in the hole, the major seems to be the one suffocating on the truth through his babble. In this film, not being able to talk properly means that you are more of an animal than an animal is.

“Rogue Male” was filmed some 30 years after the war, allowing it to have no pretenses about how evil the Nazis really were.

The movie’s title comes from the fact that when a male elephant gets separated from the herd, he’s known as a rogue male– and he’s dangerous. 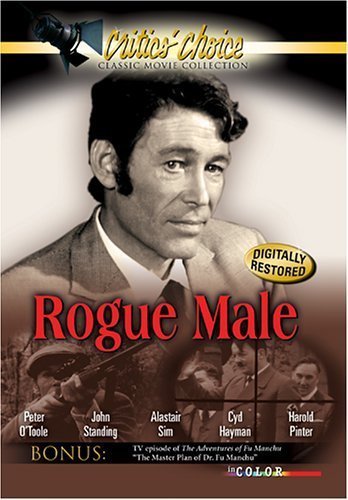