“This is one of the few film noirs made at MGM.”

This is one of the few film noirs made at MGM. It used its big stars, but did not splurge on the production values. Instead they used their standard stage sets for the city scenes, though John F. Seitz’s photography gave it a noir flavor. This low-budget film is mainly a character study story about a corrupt police sergeant, Chris Kelvaney (Taylor), who has been living well by working for crime bosses Dan Beaumonte (Raft) and the big boss, Ackerman (Simon). But Chris is in for a fall and how he handles it is what this film is all about.

In the opening shot Chris is cocky playing poker with his fellow cops, dressed in his very expensive suit while they all appear shabby next to him in their cheap suits. There is an underlying resentment towards him by his fellow officers for his superior attitude.

Chris’s younger brother Eddie (Forrest) is a rookie patrolman, who feels ashamed of his brother and is trying his best to be a good cop and restore his policeman father’s good name. He thinks his deceased father would turn over in his grave if he knew Chris was a rogue cop.

In the opening scene Eddie is about to ticket a car for parking in front of the penny arcade, when the driver suddenly appears and speeds off. That man just knifed someone to death in a gangland dispute, and the cop didn’t even get his license plates. But to the rescue comes big brother Chris, who goes to the mug shot of Wrinkles Fallon (Peter Brocco) as his brother identifies him as the killer. Through his paid informant, a newsstand seller named Selma (Carey), he learns where he can find Wrinkles.

But Chris soon finds out from Beaumonte that Wrinkles has something on the crime organization and that he’s offering his brother $15,000 to not identify Wrinkles, or else Beaumonte threatens to have his brother killed. But Eddie refuses the money, so Chris asks his girlfriend, Karen Stephanson (Leigh), to help convince him by telling him that his life is in danger. But they both won’t listen to Chris, who is summoned to Beaumonte’s luxurious apartment to explain why his brother won’t cooperate. Chris gets physical with the bodyguard Johnny (Hale, Jr.) when he is being thrown out for objecting to their threats. He gets so worked up that his brother is in danger, that he also roughs up Beaumonte. Nancy (Anne Francis), Beaumonte’s lush moll, bears the brunt of the evening activities, as she had the audacity to laugh at the gangster for getting beat up. As a result, Beaumonte has his boys rough her up and throws her out of his pad.

Nancy ends up going to Chris’s place, as Chris seems pleased that he just patched up things with Beaumonte and has 48 hours to convince Eddie to look the other way. But he soon learns the crime boss tricked him so that he would let his guard down. Instead, he hired a contract killer from out-of-town, Langley (Edwards), who takes Eddie’s life.

Chris now realizes that he can’t go on the way he is, that he must redeem himself and get those who killed Eddie. The police brass and the chief want him to resign immediately as a dirty cop, but he talks them into giving him 48 hours to get the killer and he tells them he’ll also take the stand and squeal on the mob. But the brass still don’t trust him, and put detective Sidney Myers (Ellenstein) on him as a tail.

Chris gets a tip from Nancy about what Wrinkles has over Beaumonte, before she’s drowned in the bathtub by Langley. Using Selma as an informant, Chris pays her $5,000 to get the name of the killer and where he’s staying. When Sidney wants to bring him down to the station to turn in his badge he talks the honest cop, who is treated with disrespect by the other officers, into teaming up with him to pinch the killer. Sidney looks at this as the best opportunity he’s ever had since being on the force of making a big pinch, as there is a hint that the other police officers hold him back from advancing in the force by acting in an anti-Semitic way against him.

Chris sets a trap for Beaumonte to also appear at Langley’s hideout, but this backfires as Beaumonte cagily waits outside in his car. What results is an action-packed shootout, with all the criminals being killed and both cops wounded. Chris is severely wounded and it is not clear if he will survive, but in the eyes of Sidney he is forgiven for being a crooked cop with this one good deed.

Rogue Cop is an ordinary tale of a fallen cop, but is helped by Taylor’s forceful performance. He is shown coming apart by the seams, as everything he accomplished is taken away from him and made to seem as if he was mistaken to think he was superior to the regular policeman. That the pity and contempt he had for all the others was something that he now sees was wrong. He believed the beat cops were suckers to be satisfied earning low pay without accepting graft and looked down at Karen because she had a limp. It seems that Taylor has become so disillusioned with himself that he welcomes death as long as he takes those down with him who helped ruin his life. Chris feels guilty because he has failed to protect both his brother who didn’t want his help and Nancy who did. That is why he allows Raft to get out of the trap he set for him, as he could only face himself again in death. The character driven story is more complex than most dirty cop tales, but is not that appealing as much as it is exciting. This is a good action film more than it is anything else. 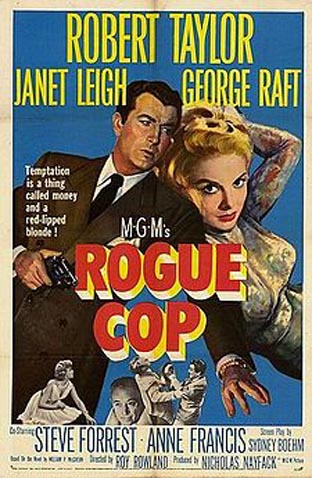