“This charmer of a WWII flyboy romantic/comedy doesn’t quite fly.”

This charmer of a WWII flyboy romantic/comedy doesn’t quite fly. It’s based on the story “Chicago Lulu” by Wayne Whittaker and written by Olive Cooper and Lawrence Kimble. Anthony Mann (“El Cid”/”The Naked Spur”/”Sing Your Way Home”) keeps it peppy and innocuous, but that’s not enough to make it more than just bearable. It’s told in flashback, as a magazine reporter interviews a bubbly new tycoon, Eddie Clark (Ralph Edwards, the host of the 1950’s TV’s This is Your Life), who tells the story of how he started his cosmetic empire named The Bamboo Blonde after first operating a small nightclub.

A struggling, spunky, down-to-earth, idealistic torch singer named Louise Anderson (Frances Langford) who works in a NYC nightclub by the airport, Eddie’s Club 50, meets a shy but wealthy pilot from Bucks County, Pa, Patrick Ransom (Russell Wade), the new skipper of a B-29 bombing crew shipping out to the South Pacific, when his snobbish socialite fiancée Eileen Sawyer (Jane Greer) stands him up. The bar was “off limits” to servicemen, as Pat ends up there because his new bomber plane crew sent him there as a joke to get rid of him so they could party together before going back to the war zone. Louise felt sorry for the lonely pilot and they went out to dinner; thinking that he’s a poor farmboy, she pays for his meal. Pat is overjoyed that he met her and takes an instant machine photograph of Louise and keeps it as a memento without even getting her name. In Saipan, the bomb crew runs into bad luck and decide to use Louise’s photograph as a good-luck charm by painting her likeness on the side of their airplane, and since Pat is too ashamed to tell them she’s not his girl and he doesn’t even know her name–they come up with the name of The Blonde Bombshell. When the bomber crew’s luck changes for the better and gets mucho publicity, Eddie promotes Louise as the real Blonde Bombshell and the club draws big crowds and she becomes well known. Soon the crew are ordered back to New York to begin a war bond promotion tour. The only thing standing in the way of the couple’s happiness is a monstrous Eileen who does everything she can to break up the couple, but predictably fails.

Romantic tales and musicals were not Mann’s forte, as this film clearly shows his stiffness in handling these genres as opposed to his brilliance doing noir and westerns. The honey voiced Langford, just returning to movies after entertaining the wartime troops while touring with Bob Hope, sings such routine forgettable songs as “I’m in the Mood for Love,” “You Are My Lucky Star,” and “Dreaming Out Loud;” her fading star quality is not enough to carry this film. 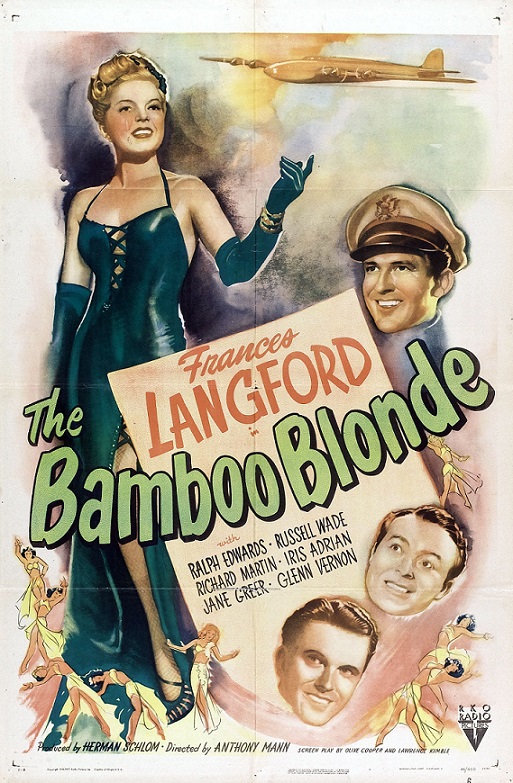