Unknown, at the time, struggling actor/writer Sylvester Stallone would get his “Rocky” script made with him starring after many studio rejections (said to be 32) thanks to producers Irwin Winkler and Robert Chartoff and United Artists for bankrolling it. This “sleeper” film (written over a three-day period and shot in twenty-eight days, mostly on location in the seedy part of Philly, with a budget of about $1 million; it would gross well over $60 million in theaters) surprisingly became the ultimate inspirational boxing pic about an underdog who makes it (no one can underestimate the public’s taste for a contrived feel-good story). There were many other previous boxing pics with the same theme (all of them I thought were better) such as The Champ (1931), Golden Boy (1939), Body and Soul (1947), Champion (1949), The Set-Up (1949), Somebody Up There Likes Me (1956), and Requiem for a Heavyweight (1956). But this is the one that took root in American pop culture and there were five more sequels, all commercial hits though none as acclaimed as the original. Its survival message and trite romantic tale seeps through all the schmaltz, sentimentality and contrivances as something real for those who look up to sports heroes who have risen from the bottom against all odds. This film seems to speak the common man’s language and connects like a good right to the chin. It miraculously went on to win Oscars for Best Director (John G. Avildsen, he previously made “Joe”), Best Film Editing (Scott Conrad), and Best Picture (it beat out Taxi Driver, Network and All the President’s Men, which should tell you what the Academy knows about best pictures). It’s basically an old-fashioned “Marty” like romance tale with boxing gloves, though of a lower dramatic caliber. It’s a ‘feel-good’ crowd-pleasing story whose own success imitates the pic’s theme. Stallone has said that he based his “Rocky” character upon little-known, 36 year-old working-class New Jersey club boxer Chuck Wepner (the “Bayonne Bleeder”), known best for the time he fought Muhammad Ali in a heavy-weight title bout in March 1975 in Cleveland, Ohio, and went the distance to lose by a judge’s decision.

The southpaw 30-year-old hero Rocky Balboa is played by Stallone. He’s a good-natured but dim-witted oaf from a Philadelphia slum neighborhood, living in a one-room dumpy flat with two turtles and a fish, nicknamed the Italian Stallion, who is lovable despite being crude and boorish. Rocky has a day job as an enforcer for a small-time South Philly loan shark (Joe Spinell), in his spare time he works out at Mickey’s gym. Mickey (Burgess Meredith) is a crusty old-timer, who thinks maybe Rocky coulda been a contender but he smokes, drinks beer, behaves like a bum and threw away his opportunity. Rocky’s beer-guzzling embittered but loyal pal Paulie (Burt Young) fixes him up with his plain-Jane timid sister Adrian (Talia Shire, sister of Francis Ford Coppola), who works in the corner pet shop, for a home-cooked Thanksgiving Day turkey dinner. Rocky spurs on the relationship by showering the withdrawn 30-year-old spinster with attention and being sensitive in a Rockylike way until he wins her over. It builds to a rags-to-riches story when the nickel-and-dime club boxer is inspired by his ‘goil’ to make something of himself and eventually gets the chance of a lifetime to fight Muhammed Ali-like champion boxer Apollo Creed (Carl Weathers) for the title of World Heavyweight Champion (the viewer is asked to swallow the plot line that with the Bicentennial celebration coming up, Creed must find a “Cinderella” opponent for the big July 4th bout — some unknown white boxer whom Creed can keep around for three rounds before knocking him out).

In a Hollywood conclusion that suspends belief, as much as its ever been suspended, our boy Rocky shows heart to go the distance following the tutelage of his wily fight manager Mickey. The big fight is the big deal about this manipulative film (exploiting that America is the land of opportunity and that everyone has a chance), as Rocky shows class losing the brawl but winning the romance. 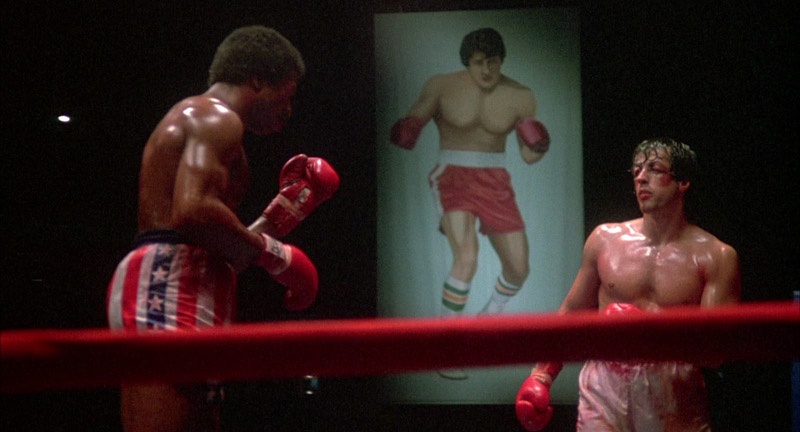