ROCCO AND HIS BROTHERS (Rocco e i suoi fratelli)

Powerful neorealist melodrama directed in a sweeping operatic style by Luchino Visconti (“The Damned”/”The Leopard”/”Death in Venice”). It’s written by Visconti, Pasquale Festa Campanile, Suso Cecchi d’Amico, Massimo Franciosa and Enrico Medioli. The epic family drama is divided into four parts bearing the name of each of the brothers and covers the struggling poor family’s life in the big city and how they lose their innocence and are torn apart by lust and greed. It’s mostly Hollywood soap and signals the death knell for neorealism as important Italian cinema.

After the death of her peasant husband, the superstitious, proud and manipulative Rosaria Parondi (Katina Paxinou) and her strapping sons Rocco (Alain Delon, French actor), Simone (Renato Salvatori), Ciro (Max Cartier), and Luca (Rocco Vidolazzi), leave there impoverished farm in the sticks of southern Italy and arrive in the big city of Milan in search of a better life. Rosaria has come uninvited to join her oldest son, Vincenzo (Spiros Focas). He’s engaged to Ginetta (Claudia Cardinale), the daughter of a middle-class family. Rosaria sparks a fight with Ginetta’s family when they taunt her with slurs about her poverty. That causes Vincenzo to leave Milan with his fiancée.

Rosaria finds the streets are not paved with gold and to survive the unemployed brothers take odd jobs, as the family dwells together in a working-class tenement. Simone falls for street prostitute Nadia (Annie Girardot, French actress) and she hooks him up with boxing people. He soon makes a name for himself as a boxer for a corrupt gay manager (Paolo Stoppa), but Nadia leaves Simone when he becomes overly possessive and acts boorish.

The gentle Rocco is drafted into the military, and meets Nadia when she’s released from prison. They begin a relationship that renews her hope in changing her depressing life. Straight-shooter Ciro has started to work at the Alfa Romeo auto factory as a mechanic and is supporting the family, while Vincenzo and Ginetta have returned to the city. But Simone begins a steady downward turn as he turns to petty crime, drinking and whoring. When Simone finds out that Rocco is with Nadia, someone who left him two years ago, he becomes insanely jealous and brutally rapes Nadia while his hoodlum cronies force Rocco to watch. The saintly Rocco blames himself for his brother’s behavior and persuades Nadia to return to Simone by saying he needs your love more than I do. This misguided sacrifice made no sense, and certainly deserves to be questioned as a move a saintly man would make.

Unable to find work Rocco moves in with Vincenzo and Ginetta, and even though he wouldn’t hurt a fly he uses his athletic skills to become a successful professional boxer. Nadia resumes her prostitute life and a downtrodden Simone moves back with Nadia to mom’s place, but the unhappy prostitute soon deserts him. Simone cajoles money from his brothers and then robs his homosexual boxing patron, who presses charges against him. But Rocco signs a 10-year boxing contract with Simone’s gay manager in order to repay his debt and keep him out of the slammer. Rocco wins his first fight. On the same day Simone locates runaway Nadia and he can’t persuade her to return to him, so he stabs her to death. After Simone confesses to the family during the family celebration for Rocco, Ciro turns him over to the police. But the family considers Ciro a traitor and he’s ostracized. Ciro considers the youngest brother Luca the only hope in the family to change, and wishes that he returns to their family place in the south and away from the corrupting influence of the big city.

Salvatori and Girardot sparkle in their tragic roles, but Delon (whose part was dubbed into Italian) is unconvincing as the virtuous wise fool and almost takes the film down for the count. Though some of the mushy scenes with Rocco are bit hard to take, there’s still a certain overall brilliance in the blend of the realistic emotional dramatics that reaches for Greek tragedy at odd moments and a sense of historical importance as Visconti adequately addresses the problem of southern emigration to the northern Italian cities as well as the destruction of the family and its traditional values.

As a footnote, Salvatori fell in love in with his co-star Annie Girardot and they married soon after the film was completed. Also, this was Visconti’s first commercially successful film even though it met with censorship in Italy (Milan refused to show it) and because it was too long at four hours causing walkouts–an American version was released at a length of less than three hours (there’s even a 95 minute version, which is the one to avoid). 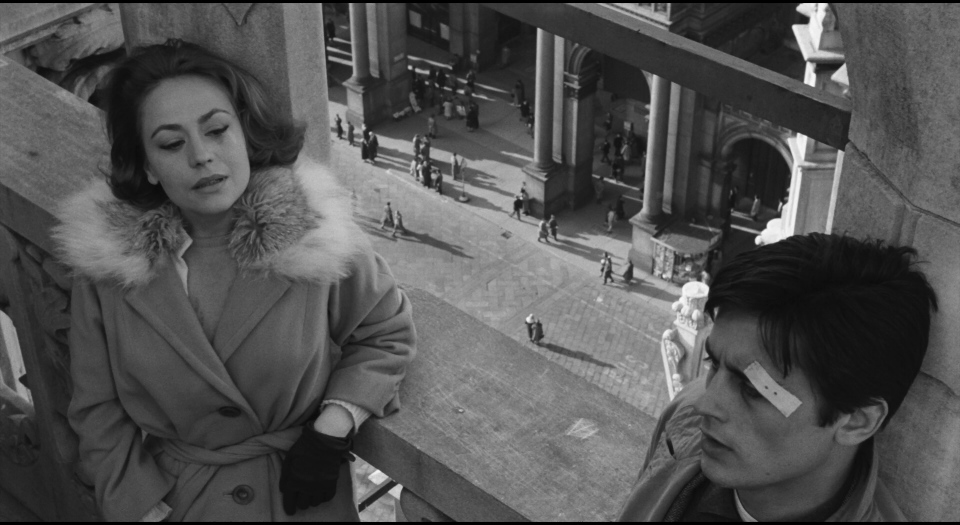