“The best thing about the film was Falk’s tough-guy performance.”

Based on the true story of lawman Burton Turkus. The mob story is played against the fictional account of a showbiz couple, Eadie (Britt) and Joey Collins (Whitman), being intimidated by the mob. This all too familiar weary crime story is about a national crime syndicate, headed by Louie Lepke and Albert Anastia. It is set during the 1930s and tells about mobster Lepke (Stewart) hiring hit man Abe Reles (Falk), the leader of the Brownsville gang, to handle contract killings exclusively for him and the mob.

When nightclub singer Joey can’t pay back the $300 loan to Abe Reles, he’s forced into working for the mobster. He fingers Walter Sage (Amsterdam), a Catskill nightclub owner and comedian, who is involved with illegal slot machines and has tried to shake-down the mob for a partnership. This is Reles’ first contract for the mob, as he fulfills the contract by sticking an ice pick in the comic’s guts.

The story is seen through the eyes of vicious hit man Reles, who says the reason we have hands is to take things. It is also seen through the eyes of the scared showbiz couple, Joey and Eadie, who can’t get rid of Reles from their life. Reles sets them up in an apartment where the mob stashes stolen goods, because Lepke needs a hiding place from Special Prosecutor Thomas Dewey. Reles stays with the couple as a minder. While in this apartment Lepke orders his trusted henchman, Mendy Weiss (Bernard), to rub out a key witness, Joe Rosen (Mintz). Lepke stole Rosen’s trucking business, and Rosen has info that could send him away for a long time. Joey overhears when Mendy tells Lepke that he shot the candy store owner in the back of the head as arranged. His testimony will be used to send the crime chief to the electric chair.

The crime story comes to a climax when tough Brownsville police Lt. Tobin (Oakland) and the new Special District Attorney Burton Turkus (Morgan), crack down on the Brownsville gang and get Reles to sing against the mob in a trade for immunity.

The best thing about the film was Falk’s tough-guy performance. Otherwise, everything was routine. 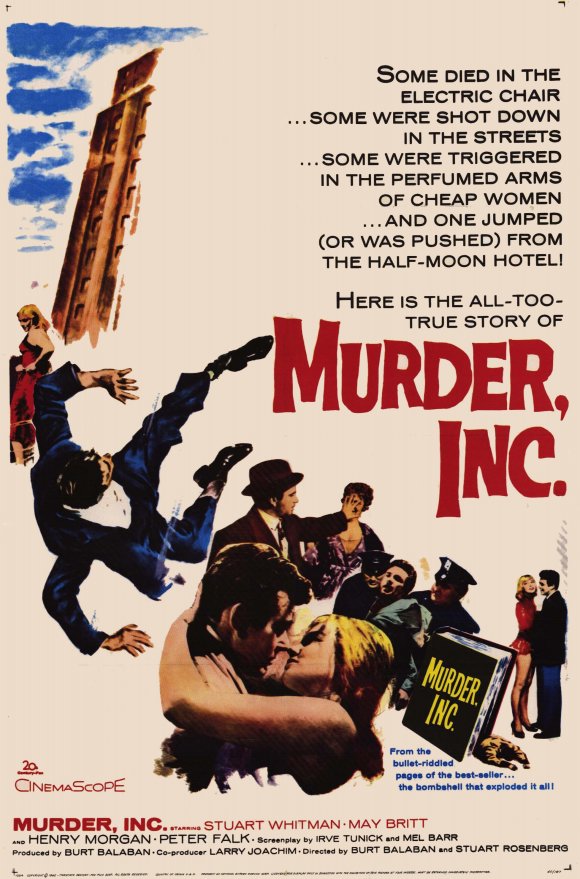